Superstars take shots at each there on social media, and it’s proven. However, some of them aren’t expected. Therefore, when Ricochet took a shot at Io Shirai on Twitter, everyone was rather taken aback.

It so happened that Ricochet posted a tweet about being better than everyone else on the roster when it’s about high flying-shots. However, fans started pointing out that there are several high-flying shots and not all can be compared. It was during this time when Io Shirai was mentioned by some fans.

The One and Only had a passive-aggressive response.

“I’m not saying she’s not amazing. She 100% is. But I can do EVERYTHING she can, probably even better. She can’t do what I am capable of, maybe not even half.”

While he deleted the tweet later, it was on the platform long enough for others to respond to it. The fans and audience started supporting the former NXT Women’s Champion and calling out Ricochet.

Not only did the fans come to her support, but also Dakota. She tweeted about Io Shirai, and pointed out she’s almost like her idol.

In everything she does, Io is the level of “effortlessly cool” we all aspire to be 😍 https://t.co/P9VJ3uniLp

Considering Ricochet is working against Sheamus on Raw, him taking shots at Shirai will not help him climb the ladder. In fact, WWE doesn’t take a long time to cancel a feud or bench a Superstar if he or she cannot connect to the audience.

It’s possible he deleted the tweet to avoid any repercussions.

Will WWE give Ricochet and Io Shirai a chance to showcase their skills together?

As of now, The One and Only is working with WWE Raw as a babyface. He is in a storyline with Sheamus, but there is no set goal for this feud. 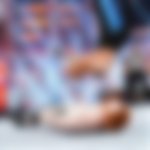 Shirai hasn’t been present on WWE NXT since she lost the championship title at NXT TakeOver: Stand and Deliver to Raquel Gonzalez.

It’ll be interesting if Io Shirai moves to WWE Raw after dropping the NXT Championship title. If she does, WWE could book a mixed tag team match where Shirai is against Ricochet. Both of them will have time to show their high-flying shots at the same time and the audience can judge for themselves.

However, as of now, Shirai hasn’t responded to Ricochet or reached out to her audience about the same.