Jake Paul is one of the biggest names in the boxing world right now. With his last win over former UFC welterweight champion Tyron Woodley, he got into the spotlight even more.

Jake Paul’s latest fight proved to be a big win for his boxing career. Recently, the YouTube star-turned-boxer knocked out former UFC welterweight champion Tyron Woodley in the sixth round. The 24-year star proved his worth in the past boxing matches.

Recently, former WWE Champion Drew McIntyre appeared in an interview. During his interview, he talked about how the world sees Jake Paul right now. He appreciated Jake Paul for his victory and his gimmick as a heel.

He said, “I say there’s plenty of time. Let’s make it happen in person. I’m assuming that Jake Paul’s fight was cool to see in person. Number one heel in the world right now. So when I have that big heel turn down the line, I’m going to start taking tips from that guy as everybody freaking hates him.” 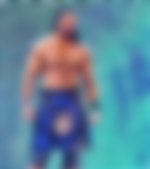 If Drew McIntyre gets a future heel turn, he could nail it with Jake Paul’s heel attitude. The “Scottish Psychopath” has set his eyes on enormous opportunities. Being a former WWE Champion, he can be the next one to face the Universal Champion.

During the conversation, McIntyre named the Jake Paul of WWE. The heel personality of Jake lies in WWE too and WWE has its own Jake Paul.

Although Jake Paul and Logan Paul are brothers, they share distinct personalities. The world knows both men for their YouTube channel and boxing career. However, Logan gets more appreciation compared to Jake.

I’m so glad Sami Zayn did not have to take a move and bump for Logan Paul. Logan Paul taking the stunner was the best outcome. #WrestleMania pic.twitter.com/MxquRyJee2

During the latest interview with Dazn News, McIntyre got questioned regarding Logan Paul, where he compared both brothers. Logan Paul well appreciates the fans where he goes. On the other side, Jake Paul carries a distinct personality, being the heel around. It seems wherever he goes; he gets booed everywhere.

Eventually, Jake carries an egoistic personality, which makes him different. The 24-year-old star has been challenged for big fights which include big names.

Jake Paul climbed the ladder to the boxing world. However, he is not getting much appreciation from the fans and other personalities because of his ego. Although he picked a big victory, fans do not appreciate him much because of his challenging ego.

Jake Paul claims to be the greatest young boxer of all time. Moreover, he intends to fight big UFC stars like Conor McGregor, Kamaru Usman, Nate Diaz, and more.

What do you think of Jake Paul’s attitude? Will he be able to win over the other UFC fighters too? Tell us in the comments.