Even though maintaining his kayfabe didn’t keep The Undertaker’s family man’s side hidden in the last few years of his career. The Phenom’s wife Michelle McCool and daughter Kaia Calaway were often at ringside or backstage cheering him while he performed in WWE.

However, in one of the matches, Taker’s daughter wasn’t impressed with him defeating her favorite WWE superstar. Kaia was sad and angry at her dad for his victory.

Sometime back, The Undertaker appeared on ‘Cold As Balls’ hosted by Hollywood star Kevin Hart. In the interview, he shared about his daughter, Kaia Calaway, being upset with her father for defeating John Cena at WrestleMania 34.

Taker said, “So few years back I’m wrestling John Cena right and it’s gonna be at WrestleMania. So we’re doing this thing on TV where Cena is just badmouthing me right. He’s trying to get me wrestling him at Mania, and I don’t want a part of it. My daughter loves him. My daughter loves Cena.”

The WWE Hall of Famer added, “So we eventually have a match. She sat in front row with her mom. It was a real quick deal. I squash him in like five minutes. I just kicked the sh*t out of him and I had him in (tombstone) and pinned him. Then I’m looking at my daughter looking for that, you know that ‘Yah, yah!’ and she’s giving me this (slowly does a thumbs down impression). I’m like what the h*ll is that (starts laughing).”

The match against Cena was the most anticipated one that night. There was a long-term story building to this feud, and Taker himself was interested in it. However, this match became extra special for him as he was facing her daughter’s favorite WWE superstar. 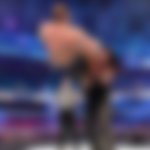 Taker might have entered the ring with the expectations of his daughter being happy with the fact that he had a match with Cena and would cheer him. Surprisingly, this didn’t happen, and Kaia was sad about the outcome.

Kaia Calaway was not happy that her father, Undertaker, defeated John Cena

Taker shared that Kaia was disappointed when he defeated John Cena at WrestleMania 34. The Deadman gave one of the best performances in recent years in that match. He shared what Kaia told him backstage after the match.

The Undertaker wasn’t able to see his daughter sad, so he went and called The Cenation Leader to Kaia. Taker knew this was the only way to make his daughter happy.

Cena who has a history of being good with the kids, said to Kaia that he deserved the loss against her father. He explained to her how many bad things he talked about Taker on WWE TV for weeks. Surprisingly, ‘The Deadman’ said Kaia was fine with that and wanted Cena to win.

A father knows how to make his daughter happy. That night, even though Taker made Kaia sad, he made her happy after calling Cena to talk with her for some time.