“My Name Is Dick Hammerbush”: John Cena Once Shared How He Humbly Started a Gigantic Career

The face of the company for a long time, John Cena, is one of the most well-known superstars in the industry. Prior to becoming a pro wrestler, Cena used to be a bodybuilder. However, after a failed bodybuilding career, he entered the land of pro wrestling.

John Cena has had an illustrious career and has won around 16 World Championships. Always a main-event performer, he has often found himself in top high-profile feuds. He had impressive mic skills and an excellent, all of which together have helped him shine as a pro wrestler.

WWE and Pro wrestling wrestlers often use a gimmick and a made-up name for their career and matches. This helps them in a better storytelling and also helps them connect with the fans more. During an interview with Wired, Cena was asked a related question.

One fan asked Cena, about how do wrestlers originate their wrestling name from, to which he answered wittily.

Cena stated that choosing his name was a complex and difficult process. He said, “You see the name John Cena is not my real name. My name is Dick Hammerbush and it’s a very difficult government name to use because of the connotation it provides. So, in thinking of a fake name they thought of John Cena.”

He further stated that it was a simple name, and he used it because he felt connected with the name. He said, “Simply, eight characters two syllables. Throw some trumpets behind it, it just works. Why don’t I use Dick Hammerbush? Because that is not who I am. I am John Cena.”

Cena is a 16-times World Champion, and is tied with Ric Flair.

Is John Cena going to return to WrestleMania 39?

2022 was the only year that John Cena did not have a single match in WWE. However, WrestleMania 39 is approaching and Cena is heavily rumored to be in it. Although, nothing has been confirmed, everything is still a rumor.

YouTube Sensation and WWE Superstar Logan Paul is also in the contention of having a match against John Cena at WrestleMania 39. In the three matches that Paul has had in his career, he has not disappointed in a single of them.

Always putting up high performances and excellent matches, Paul has already become a favourite of the fans. 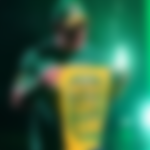 However, with nothing being confirmed, Cena’s match at WrestleMania 39  is still in question.

Watch this story: The Evolution of Dwayne Johnson