This week’s WWE SmackDown witnessed Naomi and Lacey Evans battling each other tooth and nail. A spot in this match which did not come off clean and smooth is under controversy.

Both WWE Superstars have been in a feud since Naomi won a Karaoke Showdown on SmackDown. Evans did not adjust well to this particular fact. As a result, Evans challenged Naomi for an impromptu fight. 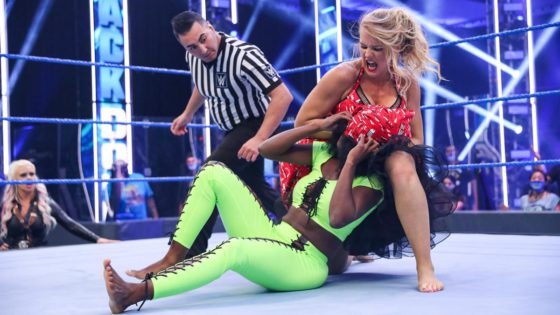 Regrettably, this match could not move further due to interference from Tamina and Dana Brooke. However, with the week that followed, Evans beat Naomi clean on WWE SmackDown.

A section of WWE fans did not respond well to this and #NaomiDeservesBetter started trending.

Coming to the latest episode of WWE SmackDown, even though Naomi’s win remains intact, Evans did not shy away from creating a fuss with the announcers.

On top of that, there are several from the WWE Universe who are not quite happy with a particular botch. 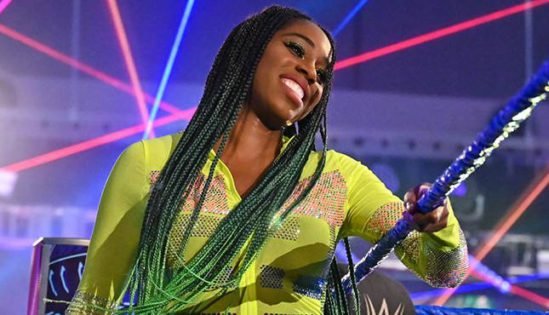 Now, some are of the opinion that it was a Canadian Destroyer gone wrong. Personally, it does not look like she was trying to attempt a Canadian Destroyer. Given the stance she uses and the flip she makes, it may have been her genuinely attempting the Blockbuster.

Regardless, not everyone is convinced. Some continue to call it a botch and are unhappy about it.

So, when a video emerged of the same, to clear the air, Naomi takes to Twitter to respond to the ones throwing hate at her.

“It’s just a sliding blockbuster not a Canadian Destroyer, not something I tried to copy from someone else, just a move I thought of bc I like doing blockbusters and wanted a different way to do it but anyway I’ll improve it”.

It’s just a sliding blockbuster not a Canadian Destroyer, not something I tried to copy from someone else, just a move I thought of bc I like doing blockbusters and wanted a different way to do it but anyway I’ll improve it ✌️ https://t.co/5s3Z8F0jRW

Now, Naomi does work on her innovations so it is likely she had something similar in mind while doing this. Hopefully, we will see a better version of the move in the future.
Read Next: Kurt Angle Reveals Vince McMahon Denied him a Dream Match with John Cena
Source: Naomi Twitter
Source: Naomi Twitter
Tags
Lacey Evans Naomi
0 Comments
Shuvangi Sen Chaudhury August 3, 2020
Share
Tweet
Share
Share
Translate to: