Who is Mandy Rose Dating?

Rose is a complete package; she is a badass in the ring and beautiful too. She has become a heartthrob, and many people are now wondering if she is dating someone or not.

Here are the full details on Mandy Rose’s love life!

Mandy Rose first came public about her boyfriend was back in 2018. She revealed on the podcast,  Chasing Glory with Lilian Garcia that she was dating NXT star Tino Sabbatelli.

The couple even attended the Hall Of Fame together, but details about their relationship have remained private. But they are now broken up, and it is speculated that the reason was Rose’s on-screen romance with Otis.

Mandy Rose also spoke about her relationship and how her boyfriend back then felt about the Otis storyline.

She said, “My boyfriend doesn’t have an issue with it. It’s all a storyline and entertainment. If he got jealous of this, or if any guy did, it wouldn’t work out, honestly.” It looks like somewhere down the line, Tino did get jealous, which led to them breaking up.

Mandy Rose had an on-screen relationship with Otis in 2020, one of the hottest storylines of that year. The fans were invested in what would happen next.

Eventually, the storyline got over and led to Sonya Deville and Mandy Rose feuding with one another.

Who is Mandy Rose dating currently?

As per tabloids, Mandy Rose’s last known relationship was with her long-time boyfriend, Michael Lubic, and they were even featured on Total Divas together.

Lubic and Rose have known each other since 2010. While the timeline of their relationship isn’t known, they got engaged and even posted about it on Instagram. 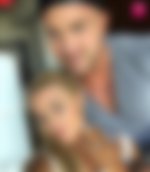 Unfortunately, the wedding bells did not ring, and the couple is now broken up. Mandy and Michael have deleted each other’s posts off on Instagram and have unfollowed each other as well.

While there is no official statement or news on this, Mandy’s social media tell a different story. While this is too little evidence, we believe the two may have separated or taken time off.

It looks like Mandy Rose is single and thriving at the moment and is focused on her career. So whatever comes next for her, we hope the NXT Women’s Champion remains happy!