Ron Killings aka R-Truth has been in the sports entertainment industry for decades now.  The 48 years old is one of the most entertaining wrestlers in the company.

Thanks to his years in the industry, Truth had the opportunity of working with some of the greatest in the business. For the same reason, he had lots of inside news too. Recently, in an interview with talksport, he revealed his work experience with Dwayne “The Rock” Johnson.

Some of the old fans might remember that R-Truth was not always the same person that he is today. Back in 2000, R-Truth was known as K-Kwik.

He and then tag-team partner, Road Dogg, would rap their way into the ring. This act was very popular among fans. His rapping skills also caught the attention of the ‘Great One.’

Truth recalls, “We’ve always been cool. I remember back in the Attitude Era when The Rock was doing music with Wyclef Jean and he’d ask me ‘hey, do you think I’m doing too much? You think I shouldn’t be rappin’?’ I said ‘Bro, do it!”

Awesome tidbit from @RonKillings talking about working with @TheRock.

“We’ve always been cool. I remember back in the Attitude Era when Rock did music with Wyclef Jean and he’d ask me ‘hey, do you think I’m doing too much? You think I shouldn’t be rappin’?’ I said ‘Bro, do it!’ pic.twitter.com/miq8rBzOED

“We were always cool. But he reached a whole different height once the Attitude Era was done. For it to come back full circle and to be in the ring with him [was great].”

R-Truth shared the ring with The Rock during a Royal Rumble match in the attitude era. However, during the PG Era, R-Truth and Miz faced Rock and Cena in a tag team match at Survivor Series 2011. 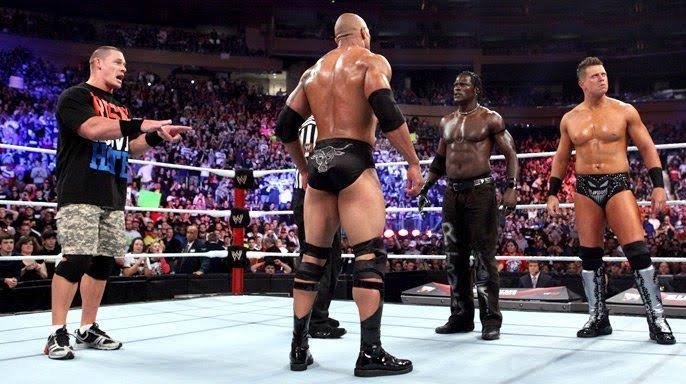 Although the duo of Miz and Truth lost, R-Truth says the match was one of the “highest pinnacles of his career.”

“Everybody was high-fiving – no egos around! No egos at all, man. It was all gratitude, humbleness, respect, appreciation – we were all a team at the time, man,” the 39-times 24/7 Champion reveals.

“To me, that was one of the highest pinnacles of my career. Just one of the best fulfilled moments where I can pat myself on the back and say I did it.”

R-Truth currently performs on the Raw Roster. The current and record 39 time 24/7 champion also revealed his work experience with Brock Lesnar and Paul Heyman. You can read about that here.

WATCH: The Undertaker Flatlines The Rock With A Deadly Tombstone on a Steel Chair

WATCH: Dwayne “The Rock” Johnson Tastes His Own Blood in Insane Workout Video