The hype for the Royal Rumble 2022 is still not over. The WWE Universe witnessed things that were against the odds. WWE legends and superstars made their short in-ring comebacks at the Rumble. Rapper Benito Antonio, aka Bad Bunny, made his surprise entrance and entered the bout as the 27th entrant into the 2022 Royal Rumble.

The record-winning singer shocked the WWE fans by knocking out Sheamus. Then, inside the ring, Bad Bunny and the legendary Rey Mysterio teamed up together to eliminate Dolph Ziggler from the match. 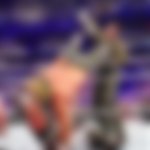 The rapper also went face to face with Kevin Owens and Riddle, even hitting the latter with a great Canadian Destroyer. However, he was eliminated by Brock Lesnar after “The Beast” hit him with an F-5.

It seems like Bad Bunny’s wrestling moves inside the 30-man battle impressed Rey Mysterio; it was backstage where Mysterio acknowledged Bunny. We saw together the two, sharing a heart-touching moment. We all know that there have been very few instances where Mysterio has unmasked himself. However, after the Royal Rumble, The Master of 619 gifted the rapper the mask he was wearing during the match.

Rey Mysterio had a towel over his head. He said, looking at the camera, “Although there was a competition, but this is a gift to Bunny, man. Thank you very much!” Gifting the legendary mask is a tremendous gesture by the Mexican, as he rarely removes his mask on camera.

The pair spoke Spanish, with Bad Bunny being very appreciative for working with Rey and receiving the legendary mask as a gift. In this video, The Grammy winner received the mask by Rey Mysterio gracefully. Bad Bunny held the mask close to his chest as a sign of respect.

Before the Rumble, The Millionaire Rapper teamed with the current U.S. Champion, Damian Priest, at WrestleMania 37. The two collided in a tag team match against The Miz and John Morrison.

Bad Bunny and Damian Priest took home the win at the grandest stage of all, WrestleMania. Eventually, the victory over The Miz and Morrison gave the record winner Bad Bunny his WrestleMania moment.

With such a one-of-a-kind gift by Rey Mysterio and the fans’ reaction, Bad Bunny is a part of the WWE family. However, he won’t be there for this year’s Premium Live Event WrestleMania 38, as he has a concert in Miami the same day as the event.