Tonight’s episode of WWE Raw just got better as the WWE Women’s Tag Team Championship was on the line. Nikki A.S.H and Rhea Ripley had to defend their title against The Most Beautiful Woman in All of WWE, Carmella, and Queen Zelina.

It has been almost over two months since Ripley and Nikki A.S.H won the WWE Women’s Tag Team Championship against Natalya and Tamina. They were on a great run until they came face to face with Carmella and Queen Zelina tonight.

Defying the odds, Zelina and Carmella pulled off a major upset tonight by defeating Rhea Ripley and Nikki A.S.H for the WWE Women’s Tag Team Championship. Carmella is looking to get a push from WWE once again while Queen Zelina is on a dream run at the moment. Zelina got crowned as ‘Queen’ after winning the inaugural Queen’s Crown Tournament at the Crown Jewel PPV last month.

Rhea Ripley started proceeding against Carmella during their tag-team match on WWE Raw. But as we have seen in Carmella’s last few matches, she would go outside the ring to get her mask on. This made Rhea impatient, and she took the fight to the outside.

Ripley started her assault on Carmella outside the ring with a Superkick right to her mid-section. Soon after that, the action got started inside the ring as Rhea dominated the early stages. She took control of the match by hitting Carmella with a clothesline and dropkick to Carmela’s face. But Carmella somehow got the tag to Zelina. 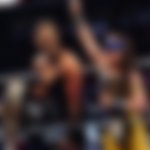 Rhea Ripley again showed her strength as she tossed Zelina to the other side of the ring. But Zelina turned things around by hitting Ripley with a Tornado DDT after Rhea lifted Zelina on her shoulders. However, Rhea tagged Nikki A.S.H in quickly, who took out all her frustrations on her opponents.

But the match turned in favor of the team of Carmella and Queen Zelina after Carmella prevented a pinfall on Zelina and planted Nikki A.S.H face first on the mat. Ripley immediately chased down Carmella, but The Most Beautiful Woman in All of WWE proved too smart for Ripley. She made Ripley chase her down at the ringside and hit her with a Superkick at the right time.

Zelina then hit Nikki A.S.H with a Code Red for the pinfall after Carmella assisted her by hitting another Superkick. It was indeed shocking to see Rhea Ripley and Nikki A.S.H lose the WWE Women’s Tag Team titles. But they will surely get their rematch in the coming episodes of WWE Raw against Carmella and Zelina.