Turns out that going to eight rounds with Logan Paul significantly brings down your GOAT status. Boxing icon Floyd Mayweather is now getting challenges from WWE Superstars, with one standing out from the rest. Former SmackDown Women’s Champion Sasha Banks wants to fight Floyd. 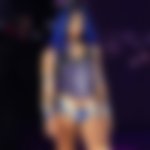 On Sunday, Floyd Mayweather ‘had fun’ in an exhibition match against YouTuber Logan Paul. Built as the biggest fight of the year, with Mayweather stepping out of retirement, the bout ended in disappointing fashion.

Fans wanted a knockout, but they got eight rounds of Floyd bobbing and weaving while Logan shockingly survived.

After the fight, many professional athletes from the world of combat sports reacted to the fight. The outcome disappointed most of them, as they see Logan as a mockery of their sport. However, the money aspect of it has grabbed the attention of Sasha Banks.

I want to fight @FloydMayweather next! #EasyMoney #BankonIt

The former SmackDown Women’s Champion would probably size up Mayweather, but the fight will be one we can’t miss out on. Whether it’s in a boxing ring or in a wrestling, get Sasha a pair of gloves and let her get cracking on the former WBC Lightweight Champion.

Logan Paul will earn $26 million for his fight with Mayweather, a gigantic sum for a YouTuber from Ohio. No wonder fighting Mayweather is a priority for the Boss, maybe even more than regaining her SmackDown Women’s Championship from Bianca Belair.

BTW, the boxer who hasn’t knocked out another boxer in over a decade also didn’t knock out Logan Paul tonight. This is my Ted Talk.

Along with her, former WWE Superstar Gregory Helms, aka the Hurricane, also trolled the fight. He went after Mayweather, claiming he couldn’t knock out another boxer for almost ten years, and couldn’t take Logan Paul down either.

Watch This Story: WWE Superstars who were Masked Imposters

With WWE returning to the road and resuming live events, Sasha Banks will make her long awaited return to the ring. She took a brief yet well deserved break after dropping the SmackDown Women’s Title to Bianca Belair at WrestleMania 37.

Banks carried both Raw and SmackDown [often NXT too] through the pandemic phase. Her rivalries with Asuka, Bayley, Carmella and Bianca Belair showcased how good the Boss can be in the ring. She also made history by holding every active female championship on the main roster in a single year.

2021 has been fantastic for Sasha so far, and it will only get better. When she returns, we would love to see her rekindle her rivalry with Bianca Belair but with her evil side coming out a lot sooner.