Sasha Banks Names Her Favorite Spider-Man Actor Of All Time

Spider-Man is a very popular Marvel comic book character that produced multiple films with three different actors. There is a huge debate regarding which actor had the best portrayal as Spider-Man. We all have our own opinions on it and so does Sasha Banks.

Sasha Banks recently showed up at the Los Angeles premiere of Spider-Man: No Way Home. She walked the red carpet alongside many stars including Zendaya, Tom Holland, and Jon Favreau, who cast Banks in The Mandalorian.

The event was a star-studded one.

While walking the red carpet, she got interviewed by different news outlets and one of them was ComicBook’s marvel podcast, Brandon Davis.

He asked her who her favorite Spider-Man was, and she seemed confused.

“I honestly I just have to say, Tobey Maguire. The OG, that’s the real one, the one I really really know.”

Then, Brandon asked her if she gets to know the spoilers for these films since she’s a part of the family. But Sasha said they don’t tell her anything and they keep it a top-secret.

The former women’s champion said she doesn’t even get to know what will happen in the Star Wars universe itself.

While being interviewed by ComicBook.com, Sasha Banks also spoke about her role and the finale of the show. Sasha Banks got cast as Koska Reeves, who is a Mandalorian warrior. Reeves is part of the Nite Owls and fights alongside the character, Bo-Katan Kryze.

The interviewer asked her if she knew that in the last episode that Luke Skywalker would take Baby Yoda with him. He also said that some actors were lied to on the set regarding the finale.

The Legit Boss said, “They lied to a lot of people. I got to watch with the rest of the fans and I got to cry. I was like ‘Woah, is this real?’ because every Mandalorian episode came out on Friday and I work on Friday.”

She saw the finale for a few minutes and then went out to work on SmackDown. Sasha couldn’t even comprehend the ending or that she was in the episode itself.

“I just got to take it in that I was on the episode or freaking Luke Skywalker and then just go to Friday Night SmackDown and say hi to Vince McMahon. So it was crazy, I was just filled with tears. I was like, ‘this is once in a lifetime opportunity.” 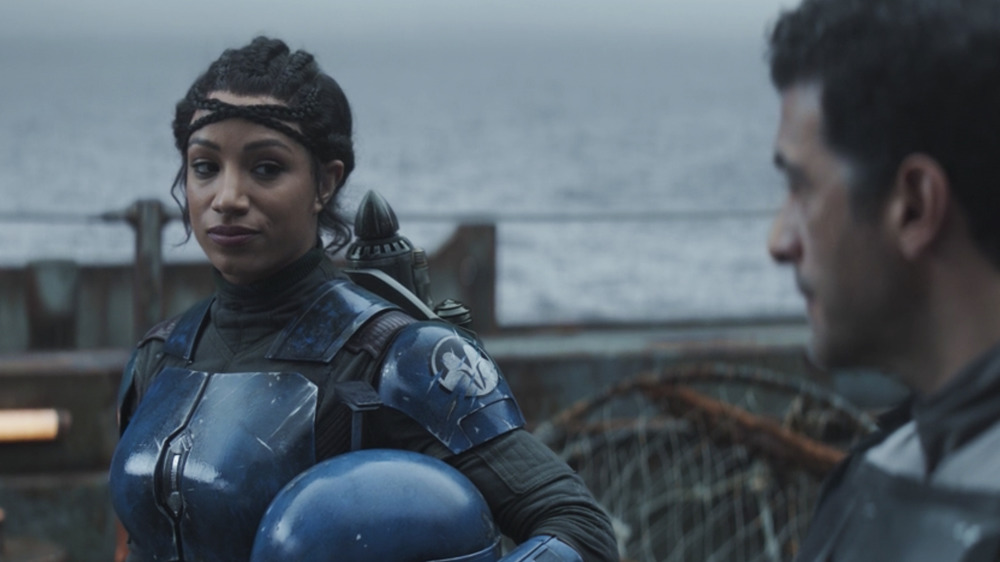 After talking about her show, Brandon Davis asked Sasha her opinion on the title exchange that took place between Becky and Charlotte; what does she think about all the news?

Sasha answered the question exactly how the legit boss would!

Watch this story: Charlotte Flair to Kevin Owens: WWE Superstars Who Got Pied on Live Shows