“This Pandemic Has Taught Me a Lot About Life”-Jon Jones

The recent untimely death of former WWE Superstar Shad Gaspard brought sorrow to the wrestling world. The 39-year-old had gone missing on May 17, when he, along with his son, got caught in a strong rip current at Venice Beach, California. The lifeguards were able to rescue his son but failed to locate Shad. 3 days later, his body washed up on Venice Beach, confirming his untimely death. This news shocked the members of the wrestling community.

Recently, his wife Siliana Gaspard took to Instagram to issue a statement on behalf of the Gaspard family. She had this to say:

Aryeh, myself and the Gaspard and Chittick families would like to take this time to thank everyone for their prayers and support, as we mourn the terrible loss of our beloved Shad. . . Shad was our whole world and we were his. There are not enough words to describe what he means to all of us. He was our heart, our soul, our protector, our warrior. He was a bright force of nature, who brught joy to many through his joyous and gracious nature. . . The outpouring of love from Shad’s friends, colleagues and fans has meant more to us than you can even imagine. . . We’d like to once again thank the lifeguards, coast guard, divers, fire and police departments for their efforts. . . Shad was and will always be our real life super hero. . . I love you more, my love ❤️ . . -Proudly, . Siliana Gaspard

In the post, Siliana thanked everyone for their prayer and support as they mourn at this terrible loss. Siliana then gave a eulogy to her husband.
She talked about Shad being her entire world and that there weren’t enough words to describe his importance in everyone’s life. She called him a ‘soul’, ‘protector’ and  ‘warrior’ who brought joy to many because of his gracious nature.
Siliana ended the statement by thanking all the lifeguards, coast guard, divers, fire, and police departments for their efforts. In the end she wrote,” I love you more, my love.” 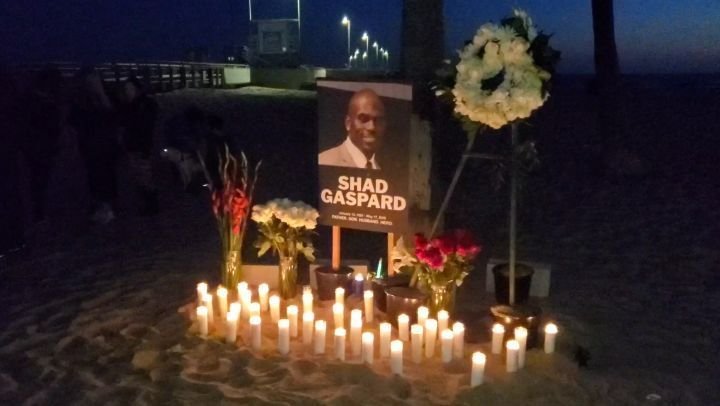 Shad’s best friend and tag partner JTG posted a video on Instagram yesterday. The video showed people lighting candles on the beach to honor Shad Gaspard and made several tweets in his remembrance.
In the same manner Legends such as Triple H, Chris Jericho among others took to Twitter to give their condolences. Some wrestlers like Dave Batista made an emotional video to describe their sadness on the matter.
Even WWE made efforts to glorify his legacy. WWE uploaded highlights of his career on YouTube. They also gave a eulogy to the 39-year-old on the network’s website and made several tweets in his honor.
Shad Gaspard was a true inspiration who will be missed and remembered by the entire community for his devotion to the professional wrestling industry. His contribution will not be forgotten.
Tags
Batista Chris Jericho JTG Shad Gaspard Triple H
0 Comments
Sahib Sharma May 22, 2020
Share
Tweet
Share
Share
Translate to: