Stone Cold Steve Austin and Dwayne “The Rock” Johnson are still inspirations for many talented pro wrestlers. Irrespective of the promotion and the rivalry, some AEW wrestlers also admire these two WWE legends. Maybe, even the AEW president Tony Khan is also a fan of these two icons.

AEW superstar Thunder Rosa compared her recent feud against Britt Baker to the historic WWE rivalry shared by The Rock and Steve Austin.

During an interview on Under The Ring, she said, “Every match that we had, it escalated to the next level… The rivalry that we have, it’s real… Now that I have the title and I took the title from her, is something that is going to end.”

“I think this is like The Rock and Stone Cold [Steve Austin], something similar, or Trish and Lita. Something of that sort. It’s just like I feel like this is never gonna end,” Thunder Rosa added.

Had Stone Cold Steve Austin not retired from in-ring competition in 2003, the WWE Universe could have seen some more matches of this ever-lasting rivalry between The Rock and Steve Austin.

Where are Stone Cold Steve Austin and Dwayne “The Rock” Johnson now?

Stone Cold Steve Austin recently gave a glimpse of his pro wrestling skills to the WWE fans. After almost 19 long years, Austin once again competed in a match against Kevin Owens on Night One of WWE WrestleMania 38. 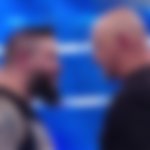 The Texas Rattlesnake made a shocking appearance again on Night Two. He reignited his legendary feud against Vince McMahon by hitting the WWE chairman with a Stunner in the middle of the ring, just like old times.

Dwayne Johnson is currently one of the biggest stars in Hollywood. His films are enjoying great success. Apart from his Hollywood schedule, he also has a lot of business ventures coming up like the XFL.

Thus, all these things are keeping ‘The Most Electrifying Man in Sports Entertainment’ busy and perhaps delaying his return to WWE.

Recently, there have been rumors of Johnson returning to WWE to fight in a match against Roman Reigns. It remains to be seen if he can find time off from his busy schedule and make this rumor turn into reality.