Both Olympic athletes have some records to their name. Steveson is the first American super-heavyweight to win freestyle Olympic gold since Bruce Baumgartner in 1992. Mensah-Stock is the first female African-American wrestler to win Olympic gold.

The crowd celebrated both the champions with thunderous applause as they made their way to the ring. Although they did not say anything, their face showed their happiness. Steveson always wanted to be a WWE wrestler for those who don’t know, and this appearance was his dream come true.

However, the most interesting part of the story happened after the appearance. On his Instagram, Steveson revealed he met WWE Chairman and CEO Vince McMahon backstage. He further hinted at a possible WWE debut as he wrote Vince was “The man I(Steveson) wanted to see.”

Apart from McMahon, Steveson met Triple H, Pat McAfee, and Mario Lopez. The 21-year-old was present in the crowd when his NCAA predecessor and inspiration Brock Lesnar returned in the main event of SummerSlam.

Considering the fact that the Olympic athlete has always been a fan of WWE, there is a high chance we could see him under the banner of World Wrestling Entertainment. Following his Olympic win, Steveson has teased a pro wrestling debut on social media.

In an interview with the University of Minnesota Athletics, he said, “This is a dream I’ve had since I was a kid. Everybody grew up watching WWE when they were young, I know I watched it. It’s just been a lifelong dream of mine.” 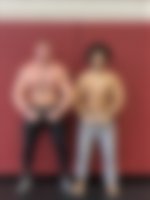 He also has a good relationship with fellow NCAA Divison I champion Brock Lesnar. He revealed, “My relationship with Brock has been awesome. It’s outstanding that a guy like that has noticed me and has gone out of his way to be there for me and guide me in the right direction. We all know who Brock is on TV, but behind everything else, he is a nice person and he has done some amazing things for me.”

The Beast Incarnate was a phenomenal college wrestler, which prompted WWE to sign him very early. After eight world championships and UFC title reigns, Lesnar has become a legend.

Apart from Lesnar, the list of NCAA Champions dates back to Bob Buckland. Olympic medalist Kurt Angle, Dolph Ziggler, Jack Swagger, Shelton Benjamin, and even Bobby Lashley were all amateur wrestlers in college.

Although he still remains unsure about his future, we would not be surprised if he winds up in WWE after his meeting with Mr. McMahon.