WWE Hall of Famer The Undertaker has incited fear in many opponents inside the squared circle. Every professional wrestler must have thought twice before stepping inside the ring with ‘The Deadman’.

However, when it comes to his real-life persona, he is the nicest. Mark Calaway, aka The Undertaker, is certainly a man with a heart of gold. Respecting women and spending time with the family is something The Undertaker values. Speaking of, ‘The Phenom’ once made a gracious gesture for his ex-wife Sara Frank.

Having a tattoo is the most intimidating on a pro wrestler’s body. But every tattoo has a personal and significant meaning. Well, The Undertaker topped that list by making a tattoo for his ex-wife, Sara.

What was the special gift The Undertaker gave to his ex-wife?

On the occasion of Sara Franks’ 23rd birthday, she and Mark Calaway exchanged vows in a low-key wedding ceremony. The Undertaker, to express his love for his ex-wife, gave her this wedding gift. 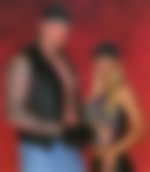 He tattooed ‘Sara’ on his throat as a wedding present. But, perhaps, engraving a ‘Sara’ tattoo on his neck was an emotionally and physically painful tattoo that The Undertaker had on his body.

“The one on my throat? Yeah, it tickled a little. It was one of the shorter settings I ever had, but it was pretty intense. Fortunately for me, I have a very high threshold of pain. So, to some extent, I guess I enjoy it. But it’s not for the weak at heart,” The Undertaker mentioned.

WWE Universe may have watched Taker’s ‘Sara’ tattoo on his neck prominently during his ‘American Badass’ and The Big Evil gimmick. However, the tattoo disappeared after the former couple separated.

What happened to the ‘Sara’ tattoo after the former couple separated?

Sara Frank and the WWE Hall of Famer got married in 2000. Moreover, after their marriage, Taker’s ex-wife made a few appearances with him. However, The Undertaker and Sara Frank officially separated in 2007.

Their divorce had one strange aftereffect as ‘The Deadman’ had inked his ex-wife’s name on his throat. After the duo went their separate ways, Mark Calaway re-inked on the tattoo to make it a sketchy chain.

Mark Calaway and Sara Frank separated ways because allegedly, Taker had an extra-marital affair with WWE Diva Michelle McCool. However, after the divorce, the former couple does not share bad blood.

WWE Superstar Michelle McCool and Mark Calaway tied the knot in 2010 and have been happy together for over a decade. However, Taker’s past tattoo for his ex-wife did not come in between the happiness and love that McCool and The Undertaker shares.