It’s always a big moment in WWE when a Superstar dethrones a long-time champion. A recent example of this is Tamina and Natalya taking over the WWE Women’s Tag Team Championship titles from Nia Jax and Shayna Baszler, and Triple H couldn’t be more proud!

Tamina thanked Triple H for teaching them, helping them, and giving them opportunities to grow in WWE.

THANK YOU SO MUCH🤙🏽💙 ✨
We appreciate you always teaching and giving us opportunities to learn and grow! Truly GRATEFUL🤟🏽 https://t.co/Wsw5t7teHI

On the SmackDown episode: May 14th, 2021, Tamina and Natalya took on the former Women’s Tag Team champions in a rematch from WrestleMania 37. The team effort helped them secure the championship titles from Nia Jax and Shayna Baszler.

To secure the win, Tamina took down Baszler, but by then, Jax had attacked Natalya. Before Nia Jax could prepare for the next moment, Tamina jumped on her. Following this, she pinned Jax for the three-count victory. 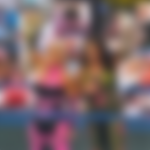 Ripley and Belair had just moved from NXT to the main roster. It made their victories a special reminder for the WWE Universe that NXT Superstars are just as good as the ones on the main roster.

Keeping aside HHH celebrating the women’s champions of WWE, he works hard to move the division forward. He does it alongside his wife and colleague, Stephanie McMahon. B

Both of them are believers that the women’s division is just as important and just as good as the men’s division. They want women to receive the same opportunities the men do.

In fact, Triple H was the only man from WWE who featured in the photograph with Stephanie McMahon and all the Superstars in the women’s division.

Finally, ‘The Game’ and Stephanie McMahon have three daughters. They want to establish WWE as a company and wrestling as an industry that is no longer male-dominant. While they’ve come a long way with that notion, they still have a chunk of the journey left.