Ronda Rousey is a decorated former UFC fighter who has transitioned into a WWE superstar. She is doing an excellent job as a professional wrestler in WWE since joining the company in 2018.

However, did you know Rousey’s one of the WWE performances was so legit that the US Government thought it was real? Moreover, they made her join a campaign for it.

As reported by Sports Illustrated, in October 2020, the Donald Trump administration launched a series of public service announcements. They aimed these at educating people about the pandemic with the theme of “Helping the President will Help the Country.”

As part of preparations for the campaign, the Department of Health and Human Services compiled a list of dozens of celebrities who might be good to include in the PSAs. The document included notes about the celebrities on political leanings and their personal history. Surprisingly, Ronda Rousey was added to the list for a RAW segment in which the police arrested her on LIVE TV. 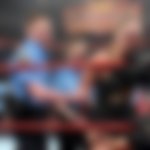 The Trump Government got confused about The Rowdy One’s role in WWE. The police arrested her during an April 1, 2019, episode of Raw, ahead of her match at WrestleMania 35 against Becky Lynch and Charlotte Flair. However, it was a staged exit.

There were several talents who got dressed up as Metropolitan Police and handcuffed Rousey, Lynch, and Flair. However, all three women were released from jail in time for WrestleMania.

This was a segment in which WWE had planned a brawl to raise the stakes of the first-ever women’s main event at the grandest stage. It seems the government of Donald Trump found it real and they did not understand that WWE staged it for Rousey’s match.

At SummerSlam this year Ronda Rousey attacked the referee after losing the match against Liv Morgan. Since losing the SmackDown Women’s Title, Rousey is embracing her baddest side. However, due to the attack on the referee, WWE has suspended her for a while.

On the recent tapings of SmackDown, i.e. 19th August 2022, The Rowdy One was arrested again. This was foe showing up on the blue brand even after being suspended. Moreover, WWE official Adam Pearce escorted her out, along with the police, to their vehicle.

Rousey isn’t holding back now, as she wants to take her title from Morgan. Also, the addition of Shayna Baszler has made the feud much more interesting. As of now, there is no news about The Baddest Woman taking part in the Clash at the Castle event.

What are your thoughts regarding Ronda Rousey’s arrest? Let us know in the comments below.