Hollywood Megastar Dwayne Johnson, aka The Rock, posted a funny video on his Instagram handle. For the past few days, The Rock has been promoting the second season of the NBC hit comedy series Young Rock.

The second season of the Young Rock series digs deep down into the early wrestling days of Dwayne Johnson. Season 2 of Young Rock shows how Johnson’s football dream was crushed and the moment when he decided to be in the wrestling business.

On that note, Dwayne Johnson shared a video on his social media recollecting a picture from the 2000s Music Awards at Radio City Hall. The Rock looked like a mountain of gold in this picture.

What exactly did The Rock pull to look like a mountain of gold?

Dwayne Johnson attended an MTV Music Awards show at Radio City Hall in New York. Even though The Rock can pull anything superbly with his style, he was not proud of what he wore on September 7, 2000, during the MTV Music Awards.

“Our #YoungRock Season 2 has me reminiscing on my early wrestling days, and let me be the first to say…..What in the Cinnamon Toast Crunch F**k was I thinking wearing this UNBUTTONED Gold Lamé outfit with rattlesnake boots,” Johnson wrote in the caption.

The Brahma Bull for this music award show in New York fashioned himself in an all-gold sparky and flashy attire. Notably, Dwayne Johnson appeared in a gold front-open jacket, gold pants with bell bottoms, and gold jewelry on his hands and across his neck.

In addition, the former WWE Champion Dwayne Johnson wore rattlesnake boots on the all-gold outfit to notch things up.

How did Dwayne Johnson express his all-gold outfit look?

Dwayne Johnson, in this gold outfit, looked like an award. And now, after two decades, Johnson took a trip down memory lane and found himself embarrassed of what he had worn. 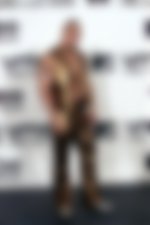 “It is so bad; I wanna give a zero. But that’s not possible. So, I give you a one,” Johnson imitated in his video.

In his TikTok video, Johnson used Tyra Banks’ iconic dialogue from America’s Next Top Model television show. However, The Rock is one of the very few people on this planet who can wear the all-gold outfit with such confidence. When we look at the picture, The Rock stands tall with a smile and his signature eyebrow raise called the “People’s Eyebrow.”

The Rock always knows how to keep his fans entertained. He recollected a photo of himself from the 2000s and slammed himself for his retro outfit. Dwayne Johnson’s fans will love to see The Rock in an all-gold outfit again because he looks electrifying.