Sami Zayn won the ladder match at Clash of Champions 2020 against Jeff Hardy and AJ Styles to become the WWE Intercontinental Champion.

The fans considered this match to be one of the best that had ever gone down at the ThunderDome. All three Superstars performed with extreme brutality, putting up a magnificent match. 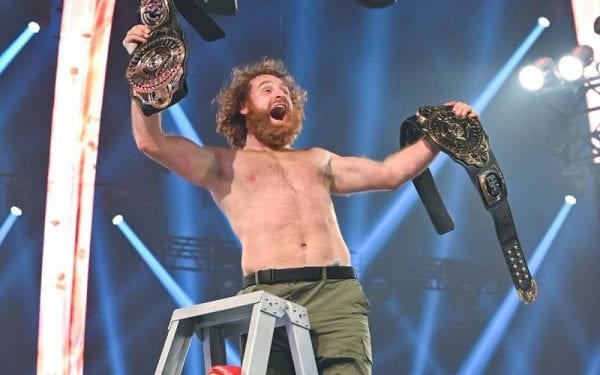 While everyone was praising Zayn for his win, Vince McMahon did not make many comments about it. A new behind-the-scenes video showcases a different side of WWE’s head honcho.

In the video, Sami Zayn and Vince McMahon share a few emotional moments. Mr. McMahon enquired if Zayn was alright and then reminded him that it was the most important thing. They ended the conversation with Vince McMahon asking the Intercontinental Champion to get back to working hard.

I want more behind the curtains stuff like this!

WWE recently released the Friday Night SmackDown season premier advertisement. Almost every Superstar on the SmackDown roster features in the segment except for Zayn.

Due to this, the Superstar called out WWE. He claimed that making profits and entertaining audience is the company’s secondary goal. The primary goal of the company was to humiliate Zayn at every chance.

People think @WWE is this international media giant whose goal is to not only turn massive profits, but to bring joy to millions of fans worldwide. And while that is all true, it’s actually secondary to it’s main objective, which is to disrespect Sami Zayn every chance they get. https://t.co/ygYflj9LTu

Even the audience was confused about why he was not a part of the advertisement.

Zayn has been performing brilliantly ever since his return to WWE after taking a break because of COVID-19. Regardless of whatever he may have said in the past about the company, he did deserve to be in the video.

Hell in a Cell prediction

Coming to Hell in a Cell, Zayn will have to watch out for who will be the challenger for the Intercontinental Championship. One of the Superstars who might challenge him is Big E.

Big E got drafted to SmackDown while the members of The New Day went to Raw. As a result, this might be Big E’s chance to prove himself in a singles run by challenging Zayn for the Intercontinental Championship.

“We Hugged, We Cried” – WWE Legend Reveals What Happened Backstage Before The Undertaker’s Final Farewell