Where does Hulk Hogan live?

Hulk Hogan is a former multiple-time WWE and WCW Champion, and one of the greatest living legends of the Pro-wrestling industry. During the vintage era, The Hulkster’s fame and the accompanying pay-check was rather enviable. Moreover, Hogan is a big wrestling personality who loves to show off his wealth.

He has an estimated net worth of $25 million. He spends most of his money on his lavish lifestyle, luxury items, and real estate.

Hogan has invested most of his money in real estate spread across Clearwater, Florida. Currently, he lives in his mansion at 1040 Eldorado Ave in Clearwater. Previously it was his residence, Belleair Manor, which was the talk of the town.

Hulk Hogan bought his Belleair mansion in 1992 at $2 million. Since then, Hulkamania has widely expanded his net worth and real estate.

The exclusive Belleair estate is located north of St. Petersburg and west of Tampa, Florida. Originally, it was a 20000 sq ft property, however, Hogan demolished the existing structure and rebuilt his new house of 17000 sq ft. Moreover, he added other luxuries, too. The construction of the house took 4 years to finish.

Hogan spent a huge amount of money to rebuild the property on the German influence theme. The house had 7 bedrooms, 9 baths with a 2000sq. ft boathouse. Hogan also featured the Belleair Manor in his reality show “Hogan Knows Best”. The show used to air on the VH1 network from 2005 to 2007.

However, Hogan sold his Belleair mansion in 2012. Earlier, the property was estimated to be over $20 million, but the downfall of the real estate market in 2009 brought the price to 13.6 million. 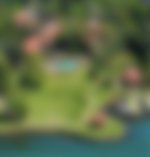 Later, it was taken down from the real estate list during Hulk Hogan’s divorce from his ex-wife, Linda Hogan. In 2012, Hogan finally sold his house for $6.2 million to Chateau Galinski.

Where does Hulk Hogan live now?

After several weeks of selling his house, Hogan bought his new property of a 5,400-square-foot home. Currently, Hogan resides at 1040 Eldorado Ave in Clearwater. He lives in the house with his wife, Jennifer McDaniel.

The house has five bedrooms, eight bathrooms, a tanning salon, a spa, and a gym. The house also includes a lift, wet bar, and a pool combined with waterfalls.

Over the past few years, Hogan invested a lot of his wealth, buying many other real estate properties in Clearwater, Florida. Today, Hogan’s net worth is estimated to be $25 million.