Who Is Charlotte Flair Married to Now?

The reigning WWE SmackDown Women’s champion Charlotte Flair doesn’t need any introduction. Debuting in 2013, Flair has achieved a status in the ring that many other female wrestlers aspire for. Putting on classic performances on a weekly basis with killer mic skills, Charlotte Flair is a complete package and is showing no signs of stopping anytime soon.

However, alongside her dominance inside the ring, Charlotte Flair’s personal life has always been a topic which her fans have been interested in.

So, what is the marital status of the Queen of WWE?

Who is Charlotte Flair’s husband?

Charlotte Flair got married to Riki Paul Johnson in 2010 before she debuted for WWE. However, her very first marriage left a bitter taste for the Queen as she divorced Riki in 2013.

‘The Queen’ then married English actor and wrestler Thomas Latimer in 2013. After spending two years together, the couple announced that they will be going their separate ways in 2015.

After divorcing Latimer, Flair took some time off from relationships and focused on her in-ring career. And from 2015 to 2019, the former Divas champion achieved a lot in the WWE ring.

Is Charlotte flair married to Andrade?

Currently, ‘The Queen’ is not married. However, she is engaged to current AEW superstar and the former WWE United States champion, Andrade El Idolo.

The two of them got into a relationship while they worked together in WWE. However, that didn’t last because Andrade was released by WWE, which separated the couple, at least professionally.

But it didn’t damage the chemistry between the two, as the two wrestlers stayed in the relationship. Since then, Charlotte Flair has confessed multiple times that she wants to work under the same umbrella with Andrade. 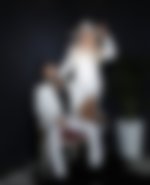 Andrade is not only close with Charlotte, but he’s also close with two-time WWE Hall of Famer and Charlotte’s father, Ric Flair. The WWE legend has always confessed that Andrade is really close to his heart and is a great in-ring performer.

Are Charlotte flair and Andrade still together?

The couple announced their engagement at the starting of 2020 and are still going strong. However, back in 2021, there were some rumors which said that Andrade and Charlotte have broken up.

However, ‘The Queen’ shut up these rumors in fashion when she uploaded a picture of her and Andrade on Christmas Eve and New Year.