Having an outdoor event is always difficult, and one with 25,000 guests is downright arduous. The elements may combine to rain on your parade, and at the Raymond James Stadium, it literally did. The venue for WrestleMania 37 received a downpour moments before the PPV began. 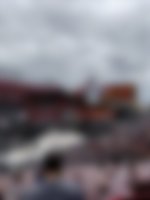 WrestleMania 37 kicks off with the WWE Championship on the line, but that match might be in jeopardy because of the weather. WWE asked fans inside the Raymond James Stadium to seek shelter because of the severe weather.

The last time it rained at a WrestleMania was in 2017 when the PPV emanated from Orlando, Florida. Being a state popular for its tropical weather, Florida isn’t unprepared for sudden downpours. However, the weather seems to have improved from what fans at the stadium have posted on Twitter.

With the Kickoff Show underway, there’s probably time for the skies to clear before Drew McIntyre and Bobby Lashley enter the battleground for their match. By the time the main event arrives, the weather will clear up.

The severe weather has passed and fans are being allowed back into the stadium.

It would be a real downer if Mother Nature ruined the first WWE PPV to have fans in attendance since the pandemic struck. WWE has compromised on the number of spectators, with only a third of the maximum capacity allowed.

The opening match of Night 1 will be the blockbuster WWE Championship match between Drew McIntyre and Bobby Lashley. Following McIntyre vs Lashley will be difficult, but Bad Bunny, Damian Priest, The Miz, and John Morrison will try their best to keep up.

AJ Styles gets a shot at becoming a Grand Slam Champion as he and Omos face the New Day for the Raw Tag Team Championships. Shane McMahon has run his mouth about Braun Strowman’s stupidity, but he can’t escape his fate when he meets the Monster inside a steel cage.

Cesaro gets the biggest opportunity of his wrestling career against Seth Rollins. Winning this match could mean so much for Cesaro’s career, but Rollins’ WrestleMania record speaks for itself.

The #1 Contender’s match for the Women’s Tag Titles is an uninspiring choice for a WrestleMania card, but WWE hasn’t done it any favors by sticking it right between two marquee matches.

The main event will be only the second women’s main event in WrestleMania history. Sasha Banks goes one-on-one with Bianca Belair for the SmackDown Women’s Title.