Coming Wednesday NXT is going to host a cage fight that will see Matt Riddle and Timothy Thatcher face off against each other with Kurt Angle joining them inside the cage. WWE legend and Hall of Famer Kurt Angle will appear as the guest referee for the match.

BREAKING: @RealKurtAngle will serve as the special guest referee for @SuperKingofBros and Timothy Thatcher's #CageFight this Wednesday night on #WWENXT! https://t.co/RZoHaH9aDY

This comes as a surprise because Angle was among the superstars that WWE released last month. The ongoing world pandemic had left the company no choice but to let go of many stars to allocate resources.

Timothy Thatcher debuted in April as a surprise partner replacing Pete Dunne. Dunne was stuck in the UK and couldn’t participate. Riddle and Thatcher would go on to retain the titles against The Undisputed Era successfully.

A few weeks later the duo failed to retain the NXT tag-team title as Thatcher left Riddle in the middle of the match. This led to heat between the two and NXT witnessed another match between the duo later that night.

Riddle picked up the win, but the feud continued when Thatcher attacked the former after the match ended.

Thatcher would later challenge Riddle for a match that would see a winner only by submission or knockout. The challenge was accepted with the condition that the match would take place inside a cage.

This match would be challenging for Thatcher as Riddle is used to cages, being a former UFC star before making a move to the WWE.

Bringing back Kurt Angle part of a strategic move? 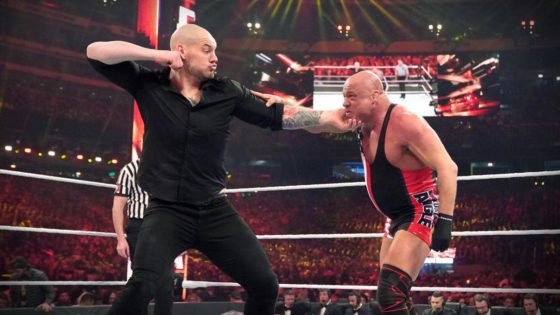 The Olympian Gold Medalist, Kurt Angle, is no stranger to cage fights. At 51 years of age, he can still perform if the situation demands.

Angle retired from in-ring wrestling due to recurring injuries. He last wrestled Baron Corbin at WrestleMania 35 last year. Angle moved backstage to work with other WWE officials to promote and bring up future stars.

After letting him go just a month back, people are puzzled about his sudden return. Perhaps, this has something to do with rivals AEW’s stardom. Bringing in someone famous as Angle to NXT would send the ratings above the roof. The company is undoubtedly planning big.

Kurt Angle Reveals How WWE Will Improve Its Show Ratings