WWE is snowballing its reach into larger and vibrant mainstream avenues, and video games are on the list. Aside from WWE’s 2k games, we’ve seen games like WWE Supercard and WWE Mayhem replicate other common mobile arcade games. However, their latest venture might be their boldest, and it’ll feature The Rock.

The Rock makes his way to The Court 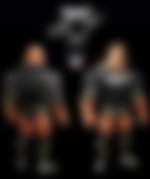 Ultimate Rivals is already a popular franchise that features some of the world’s best athletes face off on a basketball court. These include NBA superstars James Harden, Luka Doncic, ice hockey legend Wayne Gretzky and US Women’s National Team megastar Alex Morgan.

Now, WWE superstars also enter the Court, with The Rock announced as the newest member. In March, WWE announced their new agreement with Bit Fry.

Roman Reigns and Sasha Banks were the first two wrestlers on the roster, and they’ll have to make room for the People’s Champion.

Also confirmed for the game are former SmackDown Women’s Champion Bayley, and former Raw Women’s Champion Becky Lynch. According to Bit Fry, three more superstars will enter the database in the coming week. Will it be Bobby Lashley and Drew McIntyre, or will we see a former legend like Stone Cold or Hulk Hogan?

Ultimate Rivals have over 140 licensed athletes in its roster, and adding WWE’s top talent will only make the competition more intense. Bit Fry also released a new Ultimate Rivals: The Rick, referring to an ice-hockey rink.

WWE 2k22 in the development stages

The latest edition of WWE’s 2k franchise will most likely feature Drew McIntyre and Sasha Banks on the cover. This is the first time either superstar has graced the cover of an official WWE video game. Drew could’ve easily been the cover star for 2k21, but WWE decided not to develop the game.

The trailer for the video game aired at WrestleMania 37 for the first time. It featured WWE’s high-flying sensation Rey Mysterio battling WWE’s newest babyface Cesaro. The trailer received praise on Twitter, and fans cannot wait to see what 2k has in store for them.

To make #WWE2K22 Hit Different, we built a brand new scanning rig, with 80 high resolution cameras and all-new software to map everything to a high-precision 3D sculpt. Can you dig it, sucka? WOOO! pic.twitter.com/a33bIxhoDo

They’ve built a brand new scanning rig, with eighty high resolution cameras and all-new software to map everything to a high-precision 3D sculpt. The first two names to enter the scanning rig were Ric Flair and Booker T.