Just like the saying “Like father, like son,” the son of WWE legend Goldberg, Gage Goldberg, aces in the sports field, and he takes pride in watching his son. As a result, Gage may soon book his ticket to either baseball or football league.

The WWE Hall of Famer has always been proud of his son, Gage. In addition, Goldberg doesn’t skip a beat for watching his kid doing wonders on the ground.

Since Gage Goldberg is still in college, he’s a part of both baseball and a football team. ‘Da Man’ hopes that eventually, Gage might join MLB or NFL to take off his professional career.

Would WWE legend’s son, Gage Goldberg, have his spot in the NFL or MLB?

Recently, the former WWE Universal Champion took to Instagram to share his contentment for his son Gage. ‘Da Man’ posted a video in which his son did the unthinkable by performing a skillful multitask on the baseball diamond.

“With limited training time this summer, looks like @goldberg21_99 is doing some multitasking…. #linebacker drills while catching #spear,” he captioned.

The WCW legend’s son in this video played as a catcher for his baseball team. However, when the bat swung, and the opponent came running toward Gage, he acted like a football linebacker. The former WWE Universal Champion, Goldberg, went on a nostalgia trip when he watched his son catch a spear on the baseball diamond.

According to WWE Hall of Farmer’s son Gage’s Instagram profile, he is a catcher for the Champion Chargers Baseball team. Not only that, but Gage is also a middle linebacker for the college football team.

Given Gage Goldberg’s multitasking on the football and baseball field, his father has high hopes for him. We all know a WWE Hall of Famer and WCW legend who has jack hammered and speared his opponents.

However, before stepping inside the squared circle, Goldberg tried his hands to grace in the NFL. During the 1990 NFL draft, the Los Angeles Ram picked Bill Goldberg in the 11th round. 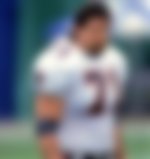 But, despite being on the Los Angeles Ram team, he did not make it through after the training camp. Well, the former WWE Universal Champion didn’t stop there because later on, he burst onto the scenes of the NFL for a short stint. The WWE superstar joined NFL’s Atlanta Falcons and made 14 appearances for the team.

However,’ Da Man’ Goldberg, during a match, tore the abdomen of his pelvis. This injury caused a significant setback in WWE Hall of Famer’s NFL career.

The former WWE Universal Champion sees a shining star in his son, Gage Goldberg. If not for ‘Da Man,’ maybe his son could make it big in the NFL.