Two-time WWE Hall of Famer Hulk Hogan was one of the names that changed the course of wrestling in the 80s. Alongside Vince McMahon, the former WCW champion made the sport so popular that his own popularity shot through the roof.

However, one relatively unknown fact about Hogan’s storied career is that he once struck a bizarre deal with Marvel Comics. The deal was made because Hogan used the name “Hulk,” a name that already existed in the Marvel Comics – The Incredible Hulk.

Hogan wrestled for Continental Wrestling Association, where the word ‘Hulk’ was used for the first time, referring to his gigantic physique. It happened during a talk show in Memphis with the actor Lou Ferrigno, who played the role of ‘Hulk’ in a TV series; Hogan (known by his real name then, Terry Bollea) was complimented for his build.

Before wrestling for WWF/WWE, Hogan was known as Terry ‘The Hulk’ Bollea. However, Vince McMahon Sr. made it Hulk Hogan and everything changed for the former champ.

As his popularity grew, Hogan started signing movies and talk shows. Hogan appeared as Thunderlips, who challenged Rocky Balboa in Rocky III in 1982.

Does Marvel own “Hulk Hogan”?

Hogan created history in 1984 when he defeated the WWF champion, The Iron Sheik, in a jam-packed Madison Square Garden.

However, with the continuous usage of the phrase ‘The Incredible Hulk,’ Marvel Comics intervened. And a licensing agreement was reached between Marvel Comics and the WWF over the use of the name Hulk in 1984.

The contract said that the company would never him as ‘Incredible’ again, just only as ‘Hulk Hogan.’ The company cannot use the colors green and purple in connection with Hogan or his logo and any logo created for the wrestler must be different from the Hulk logo.

In today’s day and age, Hogan doesn’t pay anything to Marvel. However, for 20 long years, Marvel Comics collected royalties from the two-time WWE Hall of Famer.

Marvel and Hogan negotiated a monetary agreement where Hogan had to give away 0.90 of 1% in royalties for his merchandise. And Hogan’s toys or cards had a trademark notice “Hulk Hogan is a trademark of the Marvel Comics Group, licensed exclusively to TitanSports, Inc.”

In the following image, you can read the TitanSports marking on a Hogan playing card. 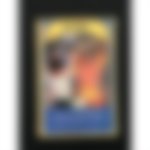 For 20 long years Hogan gave away royalties and Marvel made quite some money from the former champ.

However, changing his name was probably the best decision Hogan made in his career.