Kurt Angle and the Undertaker are two of WWE’s finest wrestlers. The Olympian and the Deadman have had stellar rivalries, ranging from 2000 to 2006. The first time they crossed paths, Angle’s career just began, and a rivalry with Taker was a tremendous deal for a rookie.

Kurt Angle recalls a hilarious segment with the Undertaker

Kurt Angle probably had the best rookie year of any athlete. He held both Intercontinental and European Championships and then won the 2000 King of the Ring tournament.

He ended the year as WWE Champion, cementing himself as a top player, but a rivalry with Undertaker was an unlikely jewel in his crown.

On the Kurt Angle Show, the former WWE Champion recalled a hilarious moment with the Deadman, where he gifted him a moped. He even name-dropped former WWE writer Brian Gewirtz, the man who wrote the incredible segment.

“Brian Gewirtz was definitely a part of it. He wrote the whole thing. The moped was hilarious. I mean to offer the Undertaker a moped was just ridiculous. It was one of the funniest things I did that year.”

Angle’s feud with the Deadman would end at Fully Loaded 2000, where he lost to Take quickly. However, he soon won the WWE Championship, and the rest is history.

Watch This Story: Most Shocking Discoveries in WWE History

Angle reflected on working with the Deadman in 2000 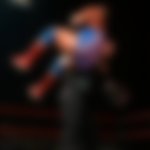 Keeping in mind that Angle was still a rookie, there’s no shame in getting squashed by the Undertaker. Later on in his career, Angle would have many matches with the Deadman, including a classic at No Way Out 2006 where he beat him. However, Angle had some thoughts on his Fully Loaded match.

“So like I said before, it was a good rub to be in the ring with the Undertaker, to be affiliated with him even though I was getting squashed. I would have rather had a lot more offence, but at this particular time this wasn’t the plan for WWE and they didn’t start having me get aggressive until after SummerSlam.”

Despite the minor hiccup, Angle had a brilliant run as WWE Champion. He stayed in the main event picture and wrestled some of WWE’s greatest matches of all time.