Rob Van Dam is a name that we associate with the ‘what if’ question. He was a top superstar at one point, holding both WWE and ECW championships, but that went away in the blink of an eye.

Regardless of his past incidents, he bounced back and still became a legend in wrestling history.

Rob Van Dam celebrated his 51st birthday on 18th December. He posted a picture of himself on Instagram to celebrate the occasion. Van Dam looked extremely jacked, and his body looked as youthful as ever!

In the caption, he wrote, “In honor of the @chrisjerichofozzy annual shirtless birthday photo…Here’s RVD- 51 years after my first worldwide appearance. Thanks for all the birthday wishes, everybody!🤙”

Many wrestlers and fans wished him on social media as well. The British Bulldog, Davey Boy Smith, wished him in the comment section, and so did Scotty 2 Hotty, former WWE superstar. 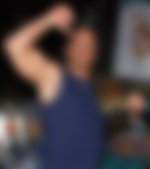 Happy birthday to the legend and WWE Hall of Famer! We hope he stays healthy and happy!

Rob Van Dam’s wife thinks she’s too scandalous to be in WWE.

RVD had been dating Katie Forbes for a few years before the two tied the knot in 2021. They got married last month in a private ceremony, and many former WWE superstars were also in attendance.

Forbes is also a professional wrestler and was in Impact Wrestling before. She was spotted in a few Independent matches, but she’s been enjoying life alongside her husband.

Katie has expressed her desire to be on WWE in a video interview with XeniaDidThat. As they talked about different topics, Xenia asked Forbes if she was offered a WWE contract, would she accept? [H/T Post Wrestling]

“Yes [I would accept an offer from WWE], that’s what I wanna do,” Katie said. “I do, and on IMPACT Wrestling, I had the highest amount of views out of anybody on YouTube. Yeah, so I was like, ‘Katie equals clicks’”

However, the former Impact Knockout thinks she is inappropriate for WWE.

“I might be a little too inappropriate for WWE right now. That’s what I’m scared of. I don’t know, but I’m scandalous. But that’s just me.”

More female talent never hurts anyone! If Forbes were to come to WWE, she could succeed since the company has never shied away from inappropriate content.