On WWE SmackDown: February 26, 2021, Bianca Belair, The EST of WWE, announced who she will challenge at WrestleMania.

She took her time, analyzed the Superstars and the situation before making her big decision. Finally, she selected the WWE SmackDown Women’s Champion as her opponent for WrestleMania.

Just as Belair pointed towards the WrestleMania sign, the arena erupted.

The popular prediction was that Belair would challenge Banks, but now that it has happened, the road to WrestleMania has become much more interesting.

Bianca Belair and Sasha Banks have teamed up before

Sasha Banks and Bianca Belair have had a great run together. Both of them teamed up during different occasions to take down the likes of Bayley, Carmella, and her devious sidekick, Reginald.

They would have probably secured the win had Reginald not distracted Banks with a bottle of Champagne.

Belair and Banks battling at WrestleMania will be make history

Bianca Belair and Sasha Banks will be the first of their ethnicity to fight for a world title. This is going to have a huge impact in the wrestling industry, and possibly beyond.

Both of them are iconic women in the sports industry. Undoubtedly, they will make an enormous impact with their match at WrestleMania. In fact, they will play major roles in taking the Women’s division in WWE to the next level.

Sasha Banks vs Bianca Belair will be the first time 2 black people will wrestle for a world title at #WrestleMania. THIS IS HISTORY! #SmackDown pic.twitter.com/dcXLA1d3TK

Does The EST of WWE stand a chance against The Boss?

Considering Belair’s rapid growth trajectory in WWE, it’s possible that she will defeat Banks at WrestleMania. Additionally, there are quite a few Superstars on the roster who want to bury Sasha Banks such as Bayley and Carmella.

Belair can pair up with either of them to take down Banks.

On the other hand, Bayley had a brief feud with Bianca. Now that the latter has challenged Banks, Bayley and Banks might reunite to take down Belair. 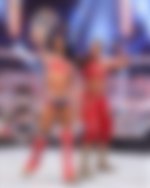 Since there is a lot of time left till WrestleMania, the WWE Universe will witness interesting segments between the two vibrant Superstars on the Women’s roster.

Finally, both of them have a significant fan following on social media. Hence, regardless of who comes out on top, WWE will gain a huge viewership during this event at WrestleMania.