Friday Night SmackDown kicked off on a high with Edge cutting an intense promo. Not just that, but the show ended on a high as well! Let’s check out what happened on this week’s edition of WWE SmackDown.

2021 WWE Hall of Famer Edge kicked off SmackDown and let his frustrations out over Daniel Bryan being added to his Universal Championship match at WrestleMania 37.

Edge added that Daniel Bryan’s actions gave him a lot of time for reflection. This allowed him to find somebody he hadn’t so far.

Alpha Academy, Ziggler and Roode, The Mysterios, and Street Profits collided in a huge eight-man tag team match ahead of their Fatal 4-Way match next week. Chaos broke loose in the ring as all men got the better of each other.

In the closing moments of the match, Montez Ford missed a From the Heavens on Gable. This allowed the former Olympian to hit Ford with his O’Connor German Suplex, followed by a second rope splash from ‘Blue Collar Solid’ Otis.

#Wrestlemania Swing is in the air… whatever it takes pic.twitter.com/Q6t7sQVo5R

‘The Messiah’ Seth Rollins and his WrestleMania opponent, Cesaro, met in the ring for an interview with Corey Graves. During the segment, Cesaro belittled Rollins every chance he got. He made subtle, funny references to his swing, leaving Rollins completely irate.

Seth Rollins told Cesaro he will embarrass him at the ‘Show of Shows.’ The two came head to head and Cesaro asked Rollins to take a swing. This made Rollins even madder, and he left the ring fuming with anger.

Apollo Crews is motivated than ever now that he has truly given himself to his ancestory. He wants nothing but the Intercontinental Championship from Big E and will go at any heights to do it.

This week on SmackDown, Crews revealed a new stipulation for his Championship match against Big E at WrestleMania 37. He revealed both men would fight in a Nigerian Drum Fight at the ‘Grandest Stage of Them All.’ However, Big E hasn’t accepted the stipulation. So, we must wait and watch if he does!

In a shocking turn of events, the ‘BOAT’ Natalya defeated one-half of the Women’s Tag Team Champions, Shayna Baszler, with an old school roll-up in thirty seconds! Complete chaos followed as Jax and Baszler attacked Natalya and Tamina.

The Riott Squad appeared and attacked the champions, taking out Nia Jax. Dana Brooke and Mandy Rose also ran down for action in the ring, but Naomi and Lana put them down.

Despite the odds, Natalya and Tamina stood tall in the end as they took out Naomi and then Lana with a Hart Attack.

Famous YouTuber and Social Media Influencer Logan Paul made his WWE debut this week on Friday. He appeared as Sami Zayn’s guest for the Red Carpet Trailer of his documentary. Logan told Sami there is no conspiracy against him, but the ‘Liberator‘ couldn’t digest it.

Sami Zayn was literally on the verge of breaking out. He started all crazy, but Kevin Owens appeared and put him down with a Stunner.

Owens then said he will continue to stun Zayn until he gets some sense back in his head. He said the treatment won’t be any different at WrestleMania. 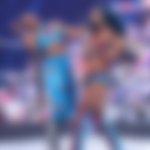 2021 Women’s Royal Rumble Winner, Bianca Belair, defeated Carmella in under ten minutes with her trademark KOD (Kiss of Death). Her WrestleMania opponent, SmackDown Women’s Champion, Sasha Banks, tried a sneak attack, but the ‘EST of WWE’ has eyes on the back of her head.

Bianca Belair saved herself from Sasha Banks‘ attack. She pointed to the WrestleMania sign and let the ‘Blueprint’ know that she will prove her point on the ‘Grandest Stage of them All.’

Daniel Bryan overcame the odds and defeated Jey Uso in a Street Fight. He didn’t just get a win, but he sent a loud and clear message to his WrestleMania opponents, Edge and Roman Reigns, after the match.

Bryan immediately attacked Edge, who was on commentary, with a running knee. He then smashed Edge’s head on the ring post repeatedly. It seemed like he was a man possessed. After Edge, Bryan set his eyes on Roman Reigns.

The former ‘Planet’s Champion’ charged towards Reigns and caught him in his trademark Yes! Lock. In fact, he didn’t just catch him in the hold, but actually made the ‘Tribal Chief’ pass out!

This was all the action that took place on SmackDown this week. Next week is a WrestleMania edition of SmackDown with some big matches announced already. How excited are you? Let us know in the comments below!