Wrestlers attempt to build a WrestleMania moment on the biggest night in Sports entertainment. Superstars also want to make a long-lasting impression on the audience and wear interesting costumes. Such was the case with Ruby Riott and Liv Morgan, aka The Riott Squad.

The team came in second in the five-team tag team turmoil match at WM 37. Before they could enter the ring, fans started noticing their outfits. Their ring gear bore an uncanny resemblance to DC Comics characters Joker (Riott) and Harley Quinn (Morgan). 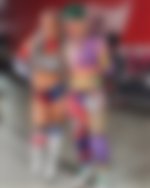 The Riott Squad lasted the longest in the match as they defeated Carmella and Billie Kay along with Dana Brooke and Mandy Rose. But unfortunately, they fell short in front of the team of Tamina and Natalya.

Morgan already has had the reputation of having a Harley-like demeanor, and this outfit added more to that. Before Morgan, former WWE Women’s Champion Alexa Bliss also sported some Harley Quinn-inspired looks.

WWE Universe reacts to the ring gears of The Riott Squad

Following the appearance of Ruby and Liv, WWE Universe was quick to pick up the reference. Twitter was buzzing with the praise of their outfits. Here are some of the tweets below –

The Riott Squad always entertain me. The Joker/Harley Quinn gear was awesome and they work like a proper tag team. #WrestleMania

FINALLY. The Riott Squad bust out the Harley Quinn and Joker cosplay.

I HAVE WAITED SO LONG FOR THIS 😍😍😍#WrestleMania #RiottSquad

I know its a Joker/Harley Quinn theme for The Riott Squad but Ruby should do the purple more.often cuz she looks good!!!#WrestleMania #WWE

riott squad deserve to win solely for the joker/harley gear

Apart from Riott Squad and Bliss, some of the Superstars who are known for their iconic pop culture-inspired ring gears are Seth Rollins, Rey Mysterio, and MVP.

WWE Universe has been very vocal about the ill-treatment of tag teams in the tag team division. The first outrage happened when the management broke up former Tag Team Champions, The IICONICS, only to put random female superstars into teams.

While the team of Nia Jax and Shayna Baszler resembles the Tag Team Hell No, there is no plausible reason for WWE to not give Riott Squad a push in the right direction.

However, tonight was not their night. Hopefully, WWE will soon recognize their talent as a Tag Team and give them the push The Squad deserves.

Let us know your thoughts on the performance of The Riott Squad on night 1 of WrestleMania 37 in the comments below.