“I Dare You to Delete This!”- Gilbert Burns Trolls His Manager on Social Media

Initially, both Superstar and the producer went to the ring so Nia Jax could apologize for her behavior earlier. In addition, she had to pay a fine of an undisclosed amount for her behavior with WWE producer Pat Buck the previous week.

However, instead of apologizing, she ended up challenging Buck to a match.

Now, with Jax refusing to apologize even though that was the initial plan, Pat Buck announces that she is facing indefinite suspension without pay.

“Nia, after your unsanctioned actions against a WWE official, you are indefinitely suspended. Without pay.”

The buck stops here for @NiaJaxWWE!

Being a Superstar, Jax did not take this information lightly. Her body language and expressions conveyed that she was infuriated.

Even though Pat Buck tried to calm her down and asked her to breathe, she was far from listening to him. Instead of calming down, she proceeded to attack Buck for this decision. 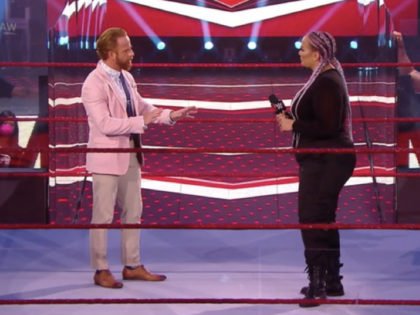 The attack was quite brutal because he blocked his hands using his coat and then head bumped his nose. While he was struggling to get up, she swiftly plants a kick on him causing him to roll over.

Now, this segment may be WWE’s method of building towards an intergender match. Even though this was once planned when Nia Jax  Dean Ambrose was in the books in 2019, it did not go forward.

On top of that, considering the drop in ratings for WWE recently, this might be another idea that WWE is fishing out of the box to boost the upcoming ratings.

It seems, though, that as of now, Nia Jax will remain suspended until further notice from the company. Even if she could have negotiated her way out of it, a second attack on Pat Buck will definitely not go her way.