Kenny King is currently signed to Ring of Honor, but the American professional wrestler is quite familiar with WWE. King appeared in the second season of the WWF’s reality television show, WWE Tough Enough. But unfortunately for him, he could not make it big as he lost out in the finals.

The ROH star had been in talks with WWE years ago, but never got the call. Recently, in an interview with Inside The Ropes, Kenny talked about WWE’s Hurt Business. He revealed he could have joined the legendary faction of WWE, but that move never materialized due to contracts and politics.

King even praised his former mate Lashley during the interview. He said, “But look, I’ve always known that Bobby Lashley was World Championship material. His work in the last year and a half has been out of this world.. He’s an animal, he’s a walking tank. He can fight you, beat you up for real.”

During the interview, King also spoke about his desire to get back to WWE. He said, “I used get a phone call like that, like once a month with The Hurt Business. ‘What are you doing?’ ‘I’m still under contract.’ You know if Vince wants to come buy me out my contract that I’d be there in a minute.’ “

Reunion of The Hurt Business on Monday Night Raw

Just when it seemed ‘The Hurt Business’ got separated, Shelton Benjamin and Cedric Alexander surprised everyone. The duo made a surprise return during Lashley’s title match with Big E on RAW.

Earlier this year, an enraged Lashley had kicked Benjamin and Cedric Alexander out of the group. It so happened that the duo got defeated by Drew McIntyre in a 2 on 1 handicap match, leading to their omission from ringside during Lashley’s match with McIntyre. 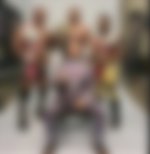 But now, it seems all is well between the members of The Hurt Business. Lashley smiled and nodded in approval after the surprise return of Cedric Alexander and Shelton Benjamin.

MVP, who is the other member of the Hurt Business, is currently undergoing knee surgery. But it won’t be long before we get to see the complete reunion of ‘The Hurt Business’.

Sensing Lashley’s growing rivalry with Big E, WWE might also announce a match between ‘The New Day’ and ‘The Hurt Business’. However, with McIntyre coming out to be Big E’s next challenger for the title, it looks to be a doubt as of now.