Paul Heyman showered Bianca Belair with massive praise in a recent interview. He appeared on an episode of Talking Smack and revealed what he truly felt about the Superstar.

According to him, Bianca Belair is the Superstar who holds the capacity of becoming the best in the Women’s division. Considering her performance at Survivor Series when she fended off the majority of Team Raw by herself, Heyman might just be onto something. 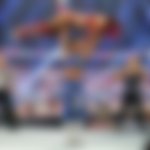 “I would be remiss if I don’t also let Bianca know, and I think she knows this quite well, You’re the future of the women’s division and [future is] a word that is thrown around here a lot, but you are. You are an athlete with amazing credentials. You bring those credentials and that credibility to WWE. What you do is truly worthy of the tagline ‘the EST of WWE.’”

Heyman compared the ‘EST of WWE’ with other Superstars

Not only did he praise her, but compared her to the well-known tag team champions of WWE – The Street Profits.

“I am in awe of the magnitude of your talent. You know, my feelings about The Street Profits. Those same feelings of admiration are bestowed upon you as well, and I think that you know that.”

“You’re the future of the women’s division… What you do is truly worthy of the tag line ‘the EST of WWE.’ I am in awe of the magnitude of your talent.” #TalkingSmack pic.twitter.com/1dF73BAh4u

Everyone in the WWE Universe knows that Paul Heyman does not give out appreciation to just anybody. The Superstar will need to be quite special for him to genuinely appreciate them.

Therefore, Heyman appreciating Bianca Belair is going to play in her favour. Hopefully, she will be able to climb the SmackDown ladder quicker and make a statement on the main roster.

Recently, Bayley and Belair got into a Twitter feud over the latter’s performance at Survivor Series 2020.

It is possible that WWE might create a storyline involving them since Bayley is done with her storyline with Sasha Banks.

Both of them are huge Superstars of the main roster. The WWE audience will certainly accept a storyline between and it will help with ratings too.

What is Paul Heyman doing in WWE?

Currently, Paul Heyman is the counsel for Roman Reigns, The Universal Champion.

He has been at his side since the day Reigns returned after taking a break from the ring because of his health issues and COVID-19.