Tonight’s Monday Night Raw was a mix of good and bad for Lana. She defeated Peyton Royce, Lacey Evans, and Nikki Cross to join team Raw. Unfortunately, moments after her win, she was put through the announcer’s table for the sixth time by Jax.

After the show, WWE interviewer Sarah Schreiber got an exclusive interview with Lana. She asked Lana if she could trust and work with Nia Jax given the history between the two. 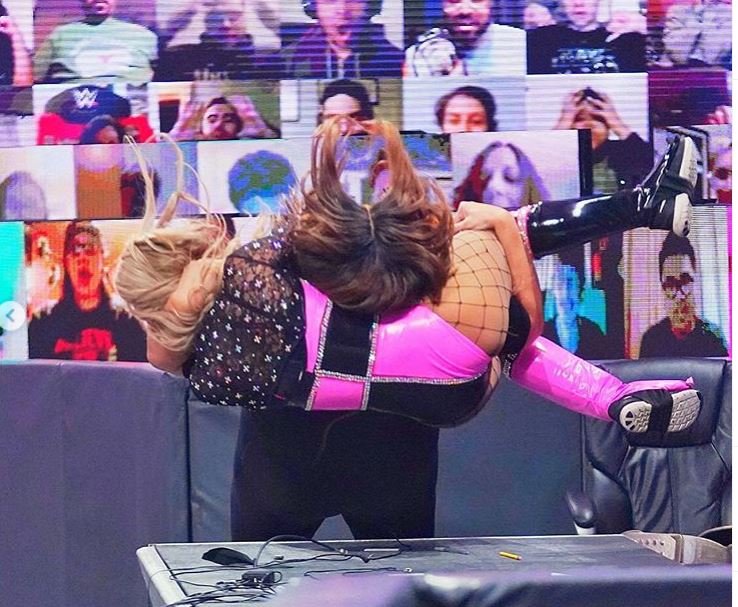 Lana replied by saying she didn’t know why Jax doesn’t like her. She claimed that ever since the Royal Rumble 2020, Jax has been salty with her for an undisclosed reason.

However, Lana claimed this won’t stop her from trying and she would never give up. She is determined to prove all her doubters wrong through her in-ring performances.

“Nia represents a lot of people that don’t believe in me. I know she represents a lot of the WWE Universe who thinks I shouldn’t be here. I am gonna go out there and prove people wrong. Tonight I proved her wrong, and you know what pissed her off more than anything? Is that I proved her wrong and that’s why she put me through a table for the sixth time. But you know what? I Am gonna keep on getting back up. She wants to keep picking on me? I am gonna keep fighting back.”

The Raw women’s Survivor Series team is the only Raw team where all slots have been filled. Lana was the last entry into the Red Brand’s team.

As mentioned above, Lana won against the likes of Peyton Royce, Nikki Cross, and Lacey Evans to enter team Raw. All Ladies put on an impressive show, the most impressive being Peyton Royce. Vinny Mac surely is not regretting his decision to make Royce a singles star.

As for the other four Superstars, there were no qualification matches at all. Adam Pearce walked down to the ring with another official to announce the team.

The first two members are Shayna Baszler and Nia Jax. It is still unclear who will be the team captain or if the champs will be co-captains. The other members are Raw’s newest acquisitions, Mandy Rose and Dana Brooke.