WWE superstar Peyton Royce has got the WWE universe talking.

The “Iconic” superstar made her debut in NXT in 2015. She didn’t have a great run in her three years on the yellow brand.

She was in rivalries with current WWE superstars like Carmella, Asuka, Nikki Cross, Sasha Banks, and SmackDown women’s champion Bayley.

Unfortunately, she always ended up on the losing side.

The Australian made her main roster debut with Billie Kay as a part of ‘The Iconics’.

Interestingly, their run on the main roster was much better.

Royce had her moment when Iconics won a fatal four-way tag team match at WrestleMania 35 to win the tag team titles. 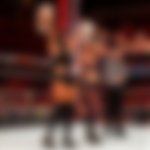 Peyton Royce’s inspiration to get into the wrestling business is the Latino Heat Eddie Guerrero.

A current-generation superstar will always have at least one or two moves in her arsenal from the legend she idolized.

The Australian’s previous finisher was a double suplex combined with Fisherman suplex.

This finisher is an adaption of her idol Eddie Guerrero’s three amigos move.
[youtube https://www.youtube.com/watch?v=SGEvOLjt6vs]

This past week, the Iconic superstar showcased her new finisher on Monday Night RAW.

It was seen in a match against Ruby Riott. However, it might look familiar to WWE fans as it is similar to the curtain call finisher of Goldust.

Royce showed off her new finisher on Twitter and the reactions show that the fans love it.

I miss her beautiful Fishermans Suplex too https://t.co/o91tze39Zr

As rightly mentioned by the first fan tweet, a strong finisher can make someone.

The finishing move plays a huge part in the career of legends who are remembered by millions to date.

Stunner, Sweet Chin Music, Pedigree, Figure Four Leglock, The F-5 and The Tombstone are all unforgettable finishers. An attractive finisher is one of the main ingredients for a successful career ahead.

What do you feel about Peyton Royce’s new finisher? Let us know below in the comments.