Nia Jax might be the “indomitable force” inside the WWE ring, but she has proved how different she is from her in-ring persona. Recently, Jax let her joviality show up during a Twitter exchange with Alexa Bliss.

Bliss recently addressed an issue from which many public figures suffer. There are multiple accounts in Bliss’s name. While some are counted as a token of appreciation (like fan pages), some actually pretend to be the “Goddess of WWE.”

Bliss issued a statement regarding this ‘identity theft’ on Twitter, as she wrote, “just a friendly reminder that this is my ONLY Twitter account, and I only have ONE Instagram account That’s verified. I do not have any “secret accounts” or “private accounts” so please do not fall for it.” 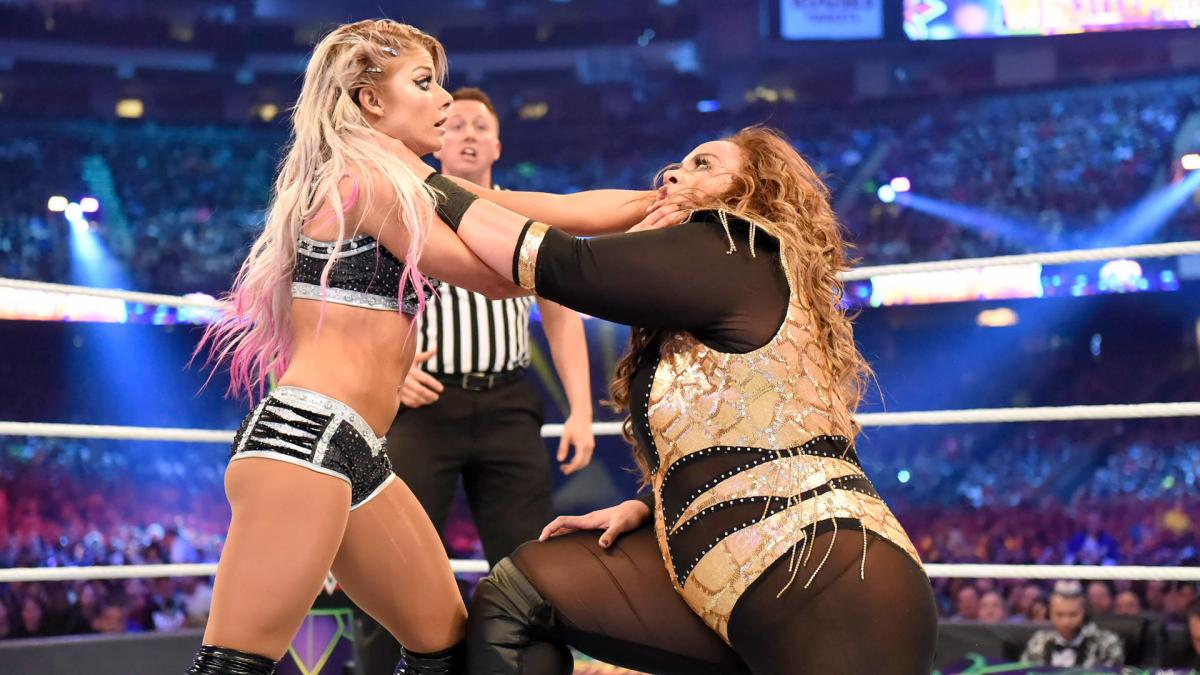 Nia Jax then took a cheeky jab at Alexa as she pretended to fall prey to one of the fake accounts. She revealed how she has been sending money and personal pictures to the ‘real’ Alexa Bliss for quite some time now. Jax wrote, “That’s a lie because you’ve been asking me to send you money and feet pics for the last year on your Al3xa_Bli$$ account!!! And I’ve been sending it to you.”

WWE Officials Adam Pearce and Scott Armstrong also joined in the on the fun earlier in a similar way. You can check all their reactions below –

That’s a lie because you’ve been asking me to send you money and feet pics for the last year on your Al3xa_Bli$$ account!!! And I’ve been sending it to you 🤯😩 https://t.co/CPvtZQchOK

Who is this and how did you get this number??? 😳

Nia Jax has had a hard time with WWE

Despite being one half of the Women’s Tag Team Champions, Nia Jax has been receiving lots of criticism. Her unlikely pairing with Shayna Baszler has raised some eyebrows from the very beginning.

Jax’s unpopularity among the fans has catapulted her into one of the top heels on RAW, but at the same time, Jax has to deal with double the criticism.

Following her win at WrestleMania 37, Jax finally snapped. She and Baszler defeated Natalya and Tamina on the second night of the event. Notably, Tamina and Nia both belong to the reputed Anoa’I Family.

“I stopped trying to gain any approval from the family a long time ago, I realized it was pointless,” Jax wrote following WM 37. “The only one I thought I could count on is Tamina Snuka. I was wrong. My partner Shayna Baszler has been there more for me in this business than my family has. That’s the truth!”

F*ck this family shit! “They say blood is thicker than water, but I remember plenty of times when water was there & blood wasn’t!”

“I’m so sick of trying to be humble and hold my tongue. It really be your own family that is quick to stab you in the back. People may not know, but Tamina Snuka is loved and respected by fans and most importantly by our family! I am the black sheep/outcast, the embarrassment,” Jax concluded.

On the latest edition of RAW, Jax abandoned Baszler during her match. Hopefully, the tag team sorts out their differences and Jax finds solace in her victories like she always has.