Andy Murray is ready to get back onto the tennis court, He recently played in the Battle of Brits tournament. He has recovered from his injury and is excited for the US Open. But the US Open will happen without fans and the return of tennis still has weeks. So Murray is now reacting to fan videos and interacting with them.

Collaborating with SPORTbible, the former World No.1 is reacting and rating the fans’ skills and fails videos. Many fans have sent in their videos for the Brit to react and rate.

All the videos were hilarious and so Murray was seen laughing a lot in the video posted by SPORTbible on its twitter account. Some videos had people showing their trick serves and shots.

🗣️ “Once you’ve hit the ball, you want to make sure you don’t follow through and hit your own balls”@andy_murray rates your tennis skills and fails pic.twitter.com/0o1CBM8kll

One video that caught Murray’s attention was a fan attempting a tweener shot. Tweener shot is a shot that is played between the legs and the fan in the video perfectly nailed that shot. Murray was impressed. And had a cheeky little advice to take care before hitting the tweener.

Very good, that was very good. Difficult shot to pull off, the tweener. Once you’ve hit the ball, you want to make sure you don’t follow through and hit your own balls” he said. 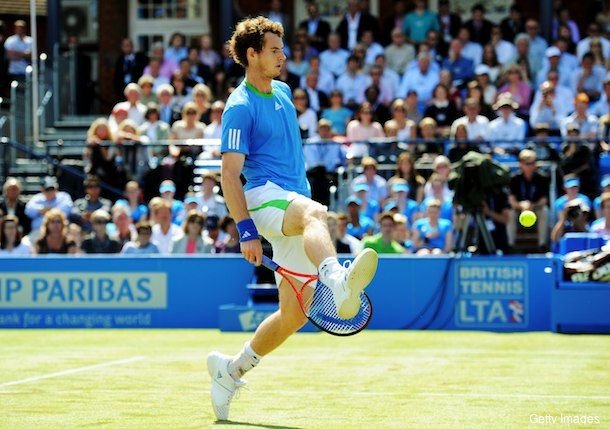 “I loved playing short tennis when I was Younger” – Andy Murray

In the end, Murray gave the first position to a young girl who was playing short tennis and volleying the ball with ease. He wished her good luck and hoped she could go on and become a good tennis player. The video also reminded him of his childhood where he used to play Short Tennis.

“I loved playing short tennis when I was younger. It’s pretty rare to see young kids playing up on the net.” said the Former World No.1

Murray also recommended people to watch Tennis Veteran star, Mansour Bahrami. Bahrami is known for his goofy behavior on the court with his cheeky shots.

If you’ve not watched any videos of him, I mean, he’s brilliant,” Murray said.

Lockdowns around the world are making players do ridiculous things. Murray is taking precautions and easing back into tennis. It will be interesting to see how much of an impact he can have when tennis resumes.