The death of an African-American, George Floyd, has risen the world against racial injustice. It was an alleged homicide by a policeman. Protestors all over the streets standing up against police brutality and the centuries-long racism in the country. In Floyd’s memorial on Thursday, his nephew spoke for him and mentioned that George was an ardent fan of LeBron James.

There were many family members who were there for the memorial service of George Floyd on Thursday. Brandon Williams, George’s nephew, was one of those who spoke for Floyd at his memorial. As LeBron has a large fan base in the NBA, he was naturally George’s favorite as well. “He (George) was the biggest LeBron James fan,” mentioned Brandon. 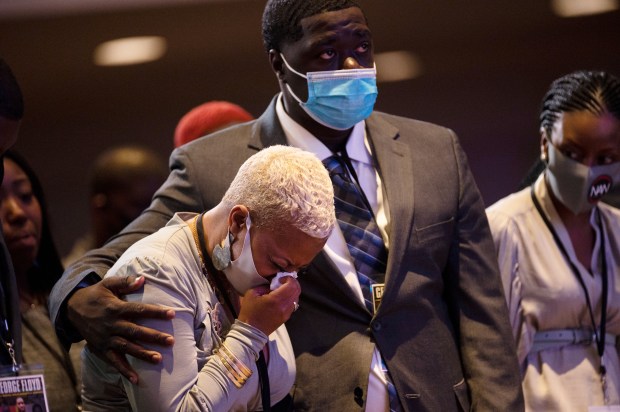 George Floyd was an ardent fan of LeBron James

Brandon recalled how happy George was after LeBron-led Cavaliers went back on the Warriors in the finals one time. Floyd called him up. “Cavaliers came back on the Golden State Warriors during the Finals, and I remember the very first phone call,” Williams remembered. “I told him, ‘You’re too happy. You sound like you won a championship.'”

To this, Floyd replied, “Man, you know how I feel about LeBron. I did win a championship.” Well, that feeling only comes from a true LeBron fan. LeBron James definitely won hearts while playing for the Cleveland Cavaliers.

Later on, this became a general ongoing joke for the two. “Every time we would talk, I would ask him, ‘How you doin’ man? You good?’ And he (George) would say, ‘I feel like I just won a championship.'” Brandon remembered George and his fondness for LeBron and the sport on his memorial.

The Lakers star is doing immensely in support of his fan, Late Mr. George Floyd. James has been quite vocal against racism and police brutality in the United States recently. Moreover, he has flooded Twitter with his opinions on the same. Lately, he was seen writing against the comment made by NFL star, Drew Brees that attracted heavy criticism.