Various debates are getting refreshed in the NBA world with the release of Michael Jordan’s docu-series, ‘The Last Dance’. From Scottie Pippen’s underpaid days to Dennis Rodman’s role in the Bulls, everything is going under a scanner these days. A few weeks back, Denver Nuggets coach, Mike Malone had picked Jordan over LeBron James as the GOAT. Well, this time it’s Charles Barkley making the same choice.

In a conversation with John Calipari on ‘Coffee With Cal Show’, Charles Barkley clearly idolized Michael Jordan as many do. He remembered his college career days when he first saw Jordan play. Charles went back to his coach and told him he never saw a basketball player like him. “The closest I ever see to Michael is probably Kobe. That’s no disrespect to LeBron. I compare LeBron more to Magic [Johnson],” Charles said.

Michael Jordan, the 6-time NBA champion, is often placed above LeBron for his ‘life or death’ attitude in the game. Moreover, Mike Malone also admitted that it’s MJ’s ‘killer mentality’ that makes him greater than LeBron. Charles Barkley spoke on the same lines with Calipari, “He’s [LeBron] not a natural-born killer. That’s the big difference.” 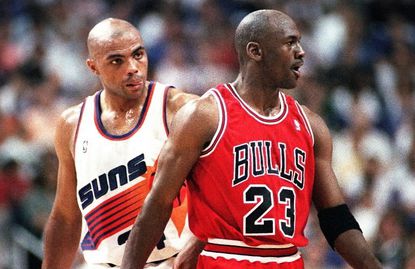 LeBron James is a 3-time Finals MVP and his team leadership skills are respected in the world of basketball. His accolades and numbers are no less than Jordan but is often weighed less in terms of winning attitude. Barkley stressed more on this by saying, “He wants to win at all costs. I think Kobe is just that same way. LeBron wants to win but I don’t think it’s life or death to him. Michael was obsessed with ‘I have to win and I’m going to win’.”

Despite what James and Jordan have achieved across eras, they continue to be compared and weighed in numbers, personality, technicality, etc. It might not be an easy choice but it’s the spirit that makes Jordan a notch higher. Michael Jordan’s ‘Flu-Game’ is another example that supports the statement made by Barkley and other former players and coaches.

“No Way Bron Eating This”: Twitter Pokes Fun at NBA as Troy Daniels Showcases Quality of Food at Orlando Bubble