The never-ending GOAT debate between Michael Jordan and LeBron James has seen many versions over the years. Current LA Clippers coach, Doc Rivers has been an opponent to both, as a player or a coach. Doc brought an interesting angle to the debate in an interview.

Doc told ‘Sports on Tap Hoops’ how the expectations differed for both the players. Michael was drafted in 1984 by the Chicago Bulls and only after seven years into the league did he win a championship.

He became a fan favorite in the initial years itself. But his identity was more individualistic back then as a player rather than associating him to the team. On the other hand, LeBron was always the team-man who takes along everybody to the top. He has been at the top of the assists chart a couple of times which evidently proves the point. 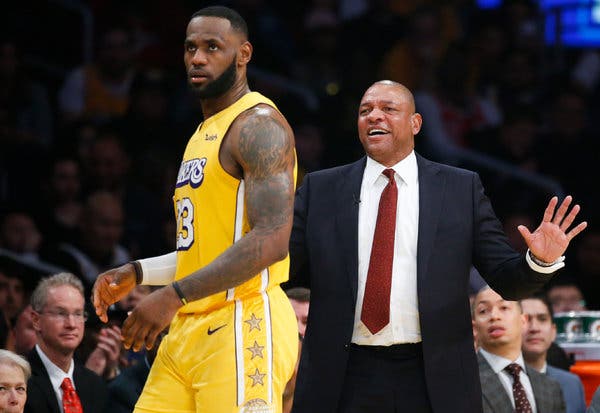 Doc has witnessed the start of both their careers and the eventual turns it took. He mentioned how nobody criticized MJ for not being a team player. “Michael… 7 years didn’t win an NBA title. It’s because he didn’t trust. He didn’t trust the system. He wanted to dominate himself,” Doc added, “He didn’t get the importance of using his teammates and using everyone else. But no one criticized Michael.”

According to the Clippers coach, Michael found his greatness in a gradual manner over time. Nobody pressurized him to become the best of his time. Well, for LeBron the expectations were on the next level from the time he stepped in.

LeBron is still going strong in the league after so many years. The Lakers star seems to achieve more in the last few years of his career. This year saw a legendary season for the big man until the league got suspended. LeBron-led Lakers are the clear favorites. Let’s see if they can still make it to the title.

“The Guy Who Traded Me Obviously Ruined the Team ”: Former Chicago Bulls Player Hits Out at Former GM

“Michael Told Me the Same Thing”: How Kobe Bryant Helped His Protege Win a Championship