Aaron Rodgers and the Green Bay Packers did not have a good start to the current NFL season. However, they cranked up the pace and defeated the Bears in Week 2. A win over Tom Brady’s Tampa Bay Buccaneers followed this streak in Week 3.

However, Green Bay Packers fans appear dissatisfied with their team’s low-scoring victory at Raymond James Stadium. In his weekly visit on ‘The Pat McAfee Show,’ Packers quarterback Aaron Rodgers addressed the issue. He discussed the fans’ dissatisfaction with the Packers’ 2-point win over the Buccaneers on Sunday.

Aaron Rodgers led the offense to crush the Buccaneers 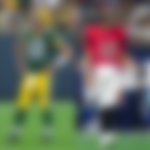 The Packers had an 11-point lead at halftime, which culminated in the Packers’ victory. Brady attempted a last-second 2-point conversion to tie the game, but it was brilliantly intercepted by Packers linebacker De’Vondre Campbell.

The Packers’ offense had a very fruitful game at Raymond James. Romeo Doubs, the young rookie wide receiver, provided Rodgers with adequate support in the win. He recorded eight receptions for 73 yards and one touchdown on a five-yard pass from Rodgers. The Packers’ first-quarter lead of 7-3 contributed significantly to their victory.

Aaron Rodgers acknowledged on his “comfort spot”, “The Pat McAfee Show”, that beating the “great” Buccaneers is no easy task. “And the Buccaneers are a great team and have a great defense. Not a lot of teams are gonna light them up.”

Rodgers also stated that the fans’ emotions are the thing that makes them so endearing to the players. He feels fans must recognize that the sport they play is difficult, and that success should be cherished when it comes against a team as powerful as the Buccaneers.

“This game will always allow for gloating and bitching on both sides. And that’s just, that’s a part of it. I think that’s what makes fans so endearing. They want to gloat about us beating the Buccaneers at the same time, bitch about the production or whatever. Listen, this is a very difficult sport, and it’s tough to win.”

Nevertheless, the Sunday battle between the two NFL giants was all about defense. It is commendable how the Packers defeated the Brady-led Buccaneers‘ defense. “It was a defensive game. We beat them 14-12. In the past, we never really won games like this. It’s just good to see us making that turnaround and able to win games like this”– as quoted by Packers defensive lineman Kerry Clark.

In Week 4 of the National Football League, the Green Bay Packers will tackle the Patriots. Patriots will be without their main quarterback Mac Jones due to an ankle injury. Packers fans will hope that their beloved team completes the hat trick of wins.

Sangeet Bhattacharyya is an NFL author at EssentiallySports. He completed his Bachelor's in Electrical Engineering from Jalpaiguri Govt Engineering College. A passionate football fan, Sangeet supports the Green Bay Packers with all his heart, and is a huge fan of Aaron Rodgers.
ARTICLES BY AUTHOR