One of the most important assets you need if you want to be a top-tier action-packed film actor is your physique. In addition, the actors work really hard to improve their physique.

Moreover, as per the Bar Bell reports, Will Smith does a bench press of 385 lbs. However, it is far away from what Dwayne Johnson and the other WWE-turned actors do.

Smith, 53, has a great physique. As per the report, Smith’s trainer claims that while training for I, Robot (2004), Smith achieved a personal best of 385 pounds bench press.

However, WWE legends turned actors do way heavier bench presses. Additionally, The Rock over the has kept on building his physique and become massive muscular. As per the same report, Dwayne Johnson did 450lbs at his peak.

In addition, “The Animal” Following his departure from WWE, Dave Bautista has been in a number of notable films, including Guardians of the Galaxy, Infinity War, and others. Additionally, during his WWE days, Bautista performed a 450-pound bench press equivalent to Dwayne Johnson’s.

However, John Cena achieved the heaviest bench press. When Cena was 38 years old, he had done a 487-pound bench press. Additionally, Cena was so near to the exclusive 500 Club. In 2015, he shared a video on Twitter of executing a 487lbs bench press.

Furthermore, WWE Legends turned actors significantly outperformed Will Smith. Because of their pro-wrestling career, they had to build a good body, which required them to lift heavier than other professionals.

Who can bench press more Dwayne Johnson or Shaquille O’Neal?

Dwayne Johnson and Shaquille O’Neal share a lot of similarities. Both luminaries have built massive fan bases over their different careers, not only because of their work but also because of their appealing personalities. 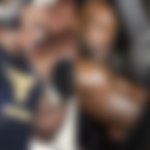 Shaq disclosed his best bench to date, but he was also forthcoming about the weight he presently benches. “My maximum was 475,” he stated. I’m now at 415. I have a terrible shoulder, but I’m working hard to get back to that. I did it twice in my prime.”

And as per The Bar Bell report, Dwayne Johnson has claims to do 450lbs at his peak. However, in an interview with WIRED, The People’s Champ stated that he does not count pounds and benches between 400 and 500 pounds.

Adarsh Ojha is a WWE and AEW Author at EssentiallySports. Before joining EssentiallySports, he gained valuable experience at Zee Entertainment and Awadh TV as a copywriter. An ardent fan of John Cena, Adarsh has earned his bachelor's degree in Broadcast and Communication.
ARTICLES BY AUTHOR