The Stupendous WrestleMania 38 concluded in its grandeur on Sunday. Although there were many criticisms about the day two not living up to the hype as day one, there were at least a few thrilling moments that satisfied the fandom. Also, there were some non-pro-wrestlers appearances in the grandest event, but UFC fighter Conor McGregor was not happy that he was not one of them.

Recently, Conor McGregor tweeted about why he was not at WrestleMania 38, claiming that WWE superstars are afraid of him. However, WWE producer and a former trainer of John Cena and Randy Orton, Fit Finlay responded to his tweet, guying him, after many WWE stars have replied to ‘The Notorious’ one’s remarks. Moreover, this is not the first time the Irishman made comments on WWE.

Fit Finlay has a distinctive place in WWE, as he was a professional wrestler for more than a decade. Moreover, after retiring, he took on the role of a producer in WWE and trained many young talents such as Trish Stratus, John Cena, Randy Orton, etc. He has been essential in their career development in the early stages and has talked about their style in a 2012 interview.

However, recently the UFC superstar Conor McGregor said something about why he was not at WrestleMania 38. The former UFC featherweight and lightweight champion wrote, “Why wasn’t I at WrestleMania? They all fear me, that’s why.”

Seeing his over the top claim, ] many WWE superstars reacted with reciprocating the taunt. Nevertheless, his fellow Irishman Finlay said, “Because Hornswoggle @DylanPostl the only one your size, was booked elsewhere!”. 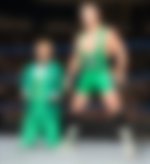 Although the joke is also not kind to the WWE superstar Hornswoggle aka Dylan Mark Postl, Finlay and him are good friends and former tag teammates in WWE. However, amongst all the banters towards ‘The Notorious’ one, Finlay’s comment stands out.

Conor McGregor is no stranger to creating controversies with his forthright remarks. Previously, McGregor has expressed his opinion that UFC is superior to WWE and obviously created Twitter discords with WWE stars. Also, he has taunted WWE legend John Cena, opining that UFC and MMA are the authentic ones.

For this recent tweet, Drew McIntyre’s outright response was, “Shut up McTapper”. Further, Sonya Deville, Sheamus, and Dolph Ziggler fired their shots as well. Nonetheless, Becky Lynch, who lost to Bianca Belair in a stupendous RAW title match at WrestleMania, had a rather positive comment.

bc even I can’t cut down to fly weight pic.twitter.com/R8eQCncRtX

Because I’m the fooking boss. 😉 call me. https://t.co/85sdNqLEvW

Hey man. I could have used you. Bianca brought an army. Next year?

Currently, McGregor is recovering from the leg injury he suffered during his trilogy fight against Dustin Poirier in July 2021 at UFC 264. He is definitely eyeing for a UFC comeback, but as per this tweet, it is also possible he would like to enter the WWE squared circle.

Sreeda U M is a WWE writer at EssentiallySports. An enthusiastic journalist, Sreeda has earned her Masters in Mass Communication and Journalism. She has been zealously following WWE since her childhood, and her favorite wrestlers are The Four Horsewomen.
ARTICLES BY AUTHOR