Athletics or track and field events is a group of events that involves running, jumping, throwing, and walking. It is one of the oldest forms of organized sport. Likewise, many athletes take part in the event and it is the most common sport in the world. Track and field competitions are famous around the world as it is a major part of the Olympics. Different athletes have graced their presence in the grandest sporting competition of all. Like the Olympics, there are different competitions held across the world- European, Commonwealth, African, Pan-American, and Asian. Other than that, the World Championships is the major competition after the Olympics. There are many events for both men and women to compete at the highest level. The IAAF (International Association of Athletics Federations sets the rules) as they check the world records too.

The sport of athletics is one of the oldest competitions in the world. Many civilizations encouraged athletes to compete against each other. The Olympic Games of Greece date back to 776 BC. After all the history, the competitions evolved only in the 19th century. Although many nations formed their own athletics clubs, it came into worldwide reach with the return of the Olympic Games in 1896. The sport spread to all corners of the world and there was a rapid interest in the events that happened.

They found the IAAF in 1912 and had almost 170 national members by 1987. Different nations have unique ways of calling out athletics. In fact, the USA prefers to address it as track and field events.

The unique events in athletics are incredible. There are different events that come into the limelight. It is classified as running, jumping, throwing, multiple events, walking events, and marathon.

Here is the list of events that athletes take part in:

They hold these competitions with different events that determine the winner. Adding up points to each winner, the event ends with the number one ranked athlete, racking up the most points.

There are two types of competitions. Race walking and walking events. For the men's division, there are two events- 20km and 50km. Women only compete in 20km events.

After walking, it is the marathon. These are long-distance competitions and stretch for around 42 km.

There are many athletes who have graced the track and field competitions with their passion and dominance. Some are legendary sprinters while others jumped their way to glory. Here are some of the greatest athletes of all time. 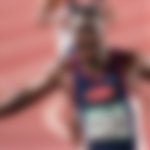