Indiana Pacers compete in the NBA as a part of the Central Division in the Eastern Conference. The franchise has multiple ABA titles to its name but has never won the NBA championship since joining the league in 1976.

The Pacers’ logo design has not changed much over the years. The team has always placed emphasis on the letter ‘P’ from the Pacers name and the same represents in the logo as well. The design is plain and simple.

One can find the letter P in navy blue that is rounded off by the team’s complete name arched over the top and the bottom of the design. A basketball is also a part of the logo which pretty much completes the entire design. 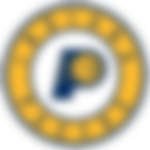 Furthermore, the Pacers play their home games at the Bankers Life Fieldhouse, a multi-purpose indoor arena located in Downtown Indiana. Besides the Pacers, the stadium also plays host to Indiana Fever of the WNBA.

Who owns the Indiana Pacers?

Real Estate tycoon Herbert Simon has been the majority owner of the Indiana Pacers for several decades. Simon purchased the Pacers in 1983 along with his brother and later acquired ownership of WNBA team Indiana Fever as well.

Herbert Simon is a self-made billionaire and his major share of fortunes emerge from the Simon Property Group, a company that has been around since the 1960s. Moreover, he owns nearly 180 shopping malls throughout the United States, Asia, and Europe. Simon’s net worth is estimated at $2.7 billion, while the Pacers franchise is valued at $1.5 billion by Forbes.

The Pacers made rapid coaching changes in 2020 after a first-round playoff exit. They fired Nate McMillan and replaced him with former Raptors assistant Nate Bjorkgren. McMillan played an integral part in structuring the Pacers team, and he boasted a 57.4% winning record during his four-year stint with the franchise.

As for Nate Bjorkgren, the 45-year-old became the 16th head coach of the Pacers with his appointment. The Iowa native has won championships in both the NBA and the G-League, and carries plenty of experience in his bag when it comes to coaching.

Moving on, former NBA player and NCAA champion Kevin Pritchard holds office as the President of Basketball Operations at the Pacers franchise. He initially joined the team in 2011, and swiftly rose up the ranks, and took over the Presidential duties in 2017.

Moreover, Chad Buchanan serves as the General Manager of the franchise. Buchanan has a long-standing affiliation with the NBA, and he was given his current role in 2017, after spending two seasons with the Charlotte Hornets as their assistant GM.

From being one of the founding members of the American Basketball Association (ABA) in 1967, the Pacers were then forced to move to the NBA when the merger between the two leagues happened.

Thus, in 1967, the Pacers, along with the San Antonio Spurs, New York Nets, and Denver Nuggets, were absorbed by the NBA. A few playoff-less seasons in the 80s were quickly overturned when the team signed Reggie Miller in the 1987 NBA draft.

Miller went 11th overall in the draft and immediately made an impact when he joined the Pacers. Reggie Miller remains to be the franchise’s most important player in history, owing to his achievements. The 5x All-Star had the ability to call games with his buzzer-beaters and formed one of the most talented rosters with the Pacers back in the 90s.

He helped the Pacers reach three successive conference finals between 1998 and 2000, out of which they made the NBA Finals once. Though the franchise faced a string of playoff defeats, one can’t deny the fact that the 90s Pacers spearheaded by Reggie Miller was one of the most feared teams during that era.

Miller pledged his loyalty to the Pacers by ending his career right where he began. Since his retirement in 2004, the franchise has seen several talented players land in Indiana to give them a few years of limited success.

Likewise, the 2013/14 Pacers team is really special. The team was led by Paul George, who wowed the league with his incredible talent. George put on a brilliant performance during the regular season to take the Pacers to the top of the Eastern Conference table for the first time in ten years.

The Pacers’ official mascot goes by the name ‘Boomer!’ The mascot has been with the team since 1991 and marks his regular presence during the team’s home games. The 6ft Panther is well-known for his high-flying dunks and his entertaining moves in addition to his All-Star game appearances.

After Nike sealed the NBA’s jersey contract, the Pacers had their uniform designs changed accordingly. The primary colors that one can spot on their uniforms are navy blue, yellow, and gray. The Pacers wear gold “Statement” uniforms, navy blue “Icon” edition, and white “Association” jerseys currently.

American electronics company Motorola Mobility LLC stands out as the jersey sponsors of the Indiana Pacers. The company endorses their brand through jersey patches as a part of a deal that was signed in 2018.

Besides Motorola, the Pacers have tie-ups with other companies like Lexus, Wenn Digital, and PointsBet to name a few.