The Texas Longhorns compete in NCAA Men’s Basketball as a part of the Big 12 Conference. Baylor, Kansas, and Texas Tech are some of their notable opponents from the conference. They were founded in 1906.

Their name originates from the Longhorn cattle, which are a part of the history of the state of Texas. They are also called the Horns.

The Longhorns logo has been the same since it was first launched in 1961. It is an orange silhouette of a bull with elongated horns. Despite being so old, it still has a modern and minimalistic look to it.

Who is the Coach of the Longhorns?

The current coach of the Longhorns is Shaka Smart. He was appointed in 2015, after coaching for six years at VCU.

In his first season, he led them to an appraisive 20-13 record. Since then he has had just one more 20+ wins season. The 2020-21 season could be promising for the Longhorns, as they have started 7-1 under Smart.

Who is the Athletic Director of the Longhorns?

The current athletic director of the Longhorns is Chris Del Conte. He joined in 2017, arriving with experience of almost three decades.

He had signed a seven-year contract and received a salary bump in February 2019 to $200,000 for his performance with the Longhorns.

The Longhorns have been impressive in their 34 NCAA tournament appearances, but have never been able to win the title. They have been to the Final Four thrice and seven times to the Elite Eight.

With 35 wins, the Longhorns ranked 6th among teams with the most wins without an NCAA title.

Before arriving in the Big 12 Conference, they were dominant in the Southwest Conference, winning 22 regular-season titles and two conference titles.

The Texas Longhorns are yet to win an NCAA title.

Over the years, many Texas alumni have made it to the NBA. The best Longhorns to grace the NBA are LaMarcus Aldridge and Kevin Durant. They were both picked #2 in the NBA Draft in consecutive years: 2006 and 2007. Durant won the Naismith Award and the Wooden Award in his only season with the Longhorns in 2006-07.

Avery Bradley, Jarrett Allen, Mo Bamba, and Tristan Thompson are some current players who came from the Longhorns ranks.

The university has two mascots. Their live mascot is called Bevo, which is a Texas Longhorn steer. It was originally introduced in 1916. The most recent Bevo is Bevo XV, which was introduced in 2016. Bevo ranked 4th in Sports Illustrated's mascot rankings in 2019.

The costumed mascot is called Hook'Em. It was launched in 1977, during a basketball game between Texas and Oklahoma. 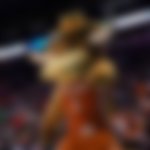 The team colors for the Texas Longhorns are burnt orange and white.

The Texas Longhorns started the 2020-21 season with a 91-55 win against the Texas-Rio Grande Valley Vaqueros. They have a 27-game regular season that ends with an away game against rivals Texas Tech on February 27. They currently have a 7-1 record.