The Denver Nuggets have a long history of playing in professional basketball leagues. They competed in the Basketball Association of America (BAA) and were a part of the inaugural edition of the 1949-50 NBA season. Denver now competes in the league as a part of the Northwest Division in the Western Conference.

The Nuggets played only a single season in the NBA and then folded before being revived in the ABA championship. They were established as the Denver Larks and later changed their name to Rockets. In 1976, Denver moved to the NBA after the merger with ABA took place. However, they were renamed as Nuggets a couple of years before entering the NBA.

Denver is also the only team out of the four ABA franchises to have never made it to the NBA finals, with the other teams being the San Antonio Spurs, Indiana Pacers, and New York Nets.

After several years of rebranding their logo, the Nuggets unveiled their latest one in 2018. 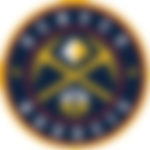 It features a pair of gold pickaxes with a mountain peak between them at the top, and a white-gold basketball at the bottom.

Who owns the Nuggets and where is their home arena?

The Nuggets are currently owned by Ann Walton Kroenke, whose value is estimated at $8.7 billion by Forbes. Besides the Nuggets, she also owns the Colorado Avalanche in the NHL. Ann Walton is the daughter of the late Bud Walton, who is the co-founder of retail giant Walmart.

The Nuggets currently play their home games at the Pepsi Center in Colorado. They previously hosted opponents at the McNichols Arena, which was demolished in 2000 after the Nuggets relocated to the Pepsi Center.

The Nuggets' current general manager is Calvin Booth, while Ann Kroenke's spouse Josh Kroenke is the president of the franchise.

A brief look into the outstanding players through the years

The Nuggets took off right after entering the league, finding tremendous success in the 80s. Though the team never made it to the NBA finals, they were led by two terrific scorers in Alex English and German forward Kiki Vandeweghe.

However, the team fell into a slump after English, and Kiki left, but shortly picked up defensive fortress Dikembe Mutombo in the 1991 NBA Draft. Though Mutombo was regarded as the best in the business during his time, he was unable to guide them past the conference semi-finals.

Fast forward to the 2000s, and the Nuggets yet again picked up a future Hall of Famer in the NBA draft. They used their third pick to select Carmelo Anthony, who found Denver as the perfect place to groom himself for the intensity of the league.

Now, the team is thriving under the dynamic pairing of Jamal Murray and Nikola Jokic. The Nuggets have established themselves as western conference giants after Mike Malone struck the right chord with the team. They’ve shaped up to be a resilient team that just won’t go down without a fight.

The main sponsor of the Denver Nuggets is Western Union, a worldwide financial and communications company, whose headquarters are based in Colorado.

The Nuggets’ main color schemes for their uniforms include midnight blue, sunshine yellow, and flatirons red. Moreover, the Nuggets boast one of the most entertaining mascots in the league who goes by the name, ‘Rocky the Mountain Lion.’