The Sacramento Kings compete in the NBA as a part of the Pacific Division in the Eastern Conference. They are the only major professional North American sports team to hold their base in the city of Sacramento.

The current version of the Sacramento Kings logo has been in effect since the 2016-17 season. It is a refined version of the classic logo from 1985. The top half resembles a crown, while the bottom half is a basketball.

The Kings play their home games at the Golden 1 Center, which is in Sacramento. Prior to the 2016-17 season, the Kings played in the Sleep Train Arena, which was their home since 1988.

Who owns the Sacramento Kings?

The current owner is Vivek Ranadive, founder of TIBCO Software. He bought the majority shares of the team in 2013 for over $534 million, taking over from the Maloof family.

Ranadive is currently worth $700 million. Prior to taking over the Kings, Ranadive was co-owner and vice-chairman of the Warriors. As of October 2020, the current valuation of the team stands at $1.775 billion.

Luke Walton is the current coach of the Kings. The Kings signed the 40-year-old in 2019 as a replacement for Dave Joerger. Walton guided the team to a 31-41 record in his first season in charge.

Before taking up the Kings' head coaching role, Walton served as the head coach for the Lakers. During that three-year stint, he had a 98-148 win record.

However, following the 2018-19 season, the Lakers fired him. Walton has also worked under Steve Kerr at the Warriors as an assistant coach.

The Kings were founded in 1923 as a semi-professional team, but turned professional in 1945. They were called the Royals back then and were initially based in Rochester. In the 1950–51 season, the Royals won the NBA title, beating the Knicks 4-3 in the Finals. That is the only title in their franchise history.

From Rochester, they moved to Cincinnati in 1957, and then in 1972, they moved again to Kansas City, where they had to change their name to Kings. Finally, in 1985, the team relocated again to Sacramento.

After their move to Sacramento, they had a long playoff drought. But from the 1998-99 season, they made the playoffs eight times in a row. During this run, they had one appearance in the Conference Finals in 2002, where they eventually lost to rivals Lakers.

A vital part of this success were Peja Stojakovic and Chris Webber, two of the best forwards in the league in their prime. Following their departure from the team, the Kings never made the playoffs again, and have been rebuilding ever since.

In 2017, the Kings drafted De'Aaron Fox with their #5 overall pick. He has been the Kings' best player in recent years and has shown leadership at just 22 years.

The official mascot of the Kings is Slamson the Lion. He is adored by the fans who come to the Golden 1 Center. Slamson bagged the Skit of the Year award for his figure skating performance during the 2018 NBA Mascot Awards Ceremony. 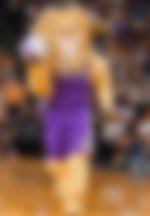 The team's colors are purple, black and gray Their association jerseys for the past few years have been white and purple. For their 35th anniversary, they had a throwback jersey which paid tribute to the Kansas City Kings.

Other major sponsors include Coca Cola, Comcast, and Golden 1, who inked a 20-year $120 million deal for the naming rights to their arena.